After pinpointing the main challenges of introduction of the merit-based system in Montenegrin state administration, Institute Alternative will continue to monitor the implementation of the Law on Civil Servants and State Employees.

With the financial support of the U. S. Embassy in Podgorica, IA will implement the project “State Administration in Montenegro – Equal for All” over the next twelve months.

Within the project, we will continue to monitor filling of vacancies in state authorities. We will also launch an online interactive platform, with an aim of encouraging citizens to report problems and eventual infringements of their rights from the side of Montenegrin administration. Guide for job candidates in state authorities will also be designed.

With the start of the implementation of the new Law on Civil Servants and State Employees in January 2013, IA has recognised the significance of the consistent implementation of this act, which is expected to introduce expert qualifications and performance of candidates as the key crteria of their recruitment and promotion.

In the annual monitoring report, we have highlighted key problems which impede establishment of the merit-based system in Montenegrin state administration.

State authorities were not prepared for the implementation of the new act. Until January 1, 2014, data for only third of employees who fall under the scope of the Law were entered into the Central Human Resources Register. 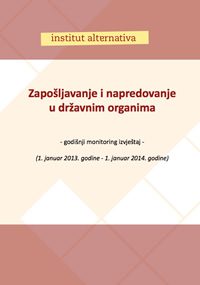 properly resolved before the start of the application of the act. Their job security was thus severely endangered. Only in the Ministry of Interior, there were over 500 fixed-term employees in 2013, although the Law prescribes this kind of employment just in exceptional circumstances. More than third of these employees will lose their jobs, because they fail to meet eligibility criteria for positions they currently occupy.

Five people appealed against recruitment procedures in state administration authorities over the previous year. The three appeals were upheld. Decisions on upholding these appeals suggest the inconsistencies in ensuring funds for filling of vacancies and disrespect of eligibility criteria for a job position.

These findings suggest the need for continuous monitoring of the application of the new rules. More engagement from the side of the state authorities, especially of the Human Resources Management Authority, Administrative Inspection and of the State Audit Institution, is also required in order for the circumvention of the Law to be prevented.