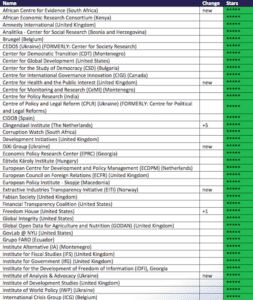 In the report published today, Institute Alternative received five stars for transparency, along with the Center for Democratic Transition (CDT) and the Center for Research and Monitoring (CeMI). Once again, we found ourselves in the company of renowned think thanks around the world, such as Amnesty International, Bruegel, Freedom House and others.

“Transparency continues to matter”, Transparify states in its report, highlighting that the governments around the world are putting think tanks (and civil society organisations more broadly) under pressure.

Think thanks are rated based on the extent to which they publicly disclose where their funding comes from. Organisations rated with 5 stars provide the public with clear information about donors, funding amounts and particular projects and as such can serve as an example to which other organisations and administration can look up to.

The five-star reassessment is another indicator of the quality of our work and the values that guide us in our work and which we require from others – transparency and integrity primarily.

Recognition of our transparency in the time when sources of funding and nature of the functioning of the non-governmental sector in Montenegro are being manipulated presents a special confirmation and acknowledgment.

We recall that non-governmental organisations from Montenegro have achieved remarkable results since the first year of the implementation of this assessment and all reports mention Montenegro as a country that has a significant number of transparent think thanks in proportion to its size.

“Reflecting their strong representation among the think tanks we engaged with in the past, 14 of the highly transparent think tanks are based in the United States, and 13 in the United Kingdom. In Ukraine we found six think tanks that are 5-star, in Georgia five, in Canada four, in Belgium and Montenegro three, in Sweden and Norway two each”, reads the report.

Transparify is an international initiative that promotes transparency in public policy research.