Having in mind that environment in which elections take place is far wider and longer process than the electoral campaign or election day only,  European Commission should provide its own assessment and not rely on OSCE ODIHR mission report only.

Ana Đurnić, public policy researcher at Institute alternative participated in the panel “Frontrunner in a slow race? Montenegro’s EU integration path” organised by the Centre for Monitoring and Research (CeMI) in cooperation with the European Policy Centre in Brussels, on 8 May 2019.

“Fair and democratic elections are influenced by number of long lasting governance failures including among many others, monopolies and corruption in public procurement, political party employment in public sector, misuse of discretionary powers in distribution of budgetary funds, social benefits, loans to individuals and companies”, she added.

She reminded that the Government did not do anything to improve public procurement system, although the European Commission noted backsliding in this area last year.

She highlighted the need for further extension of basic/key recruitment and promotion rules prescribed in Law on Cicil Servants and State Employees (LCSSE) to wider public sector ( health sector, education sector, public enterprises and public institutions), in order to prevent political employment. “Posts for employment in public sector which fall outside of scope of LCSEE have been opened for a one day only, thus not allowing for minimum of transparency and competition”, Đurnić aded.

She pointed out that there is no political accountability in Montenegro and that, on the contrary, key actors of well-known electoral frauds affairs have been promoted both in the public service and in the party. “Ex director of the Railway Directorate, key actor of the “Ramada” Affair and member of the Social-democrats, became Senior Advisor I at the Finance and Accounting Department of the Ministry of Transport and Maritime Affairs in the Government of Montenegro, while the former mayor of the Capital City Podgorica and key actor of the “Envelope” Affair is now Secretary General of the President of Montenegro”, she aded. 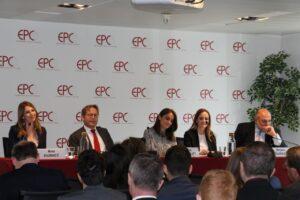 “Besides, the Government is actively working on shrinking space for civil society activism”, said Đurnić and reminded of the amendments to the Law on Free Access to Information from May 2017, which introduced a tax and business secret as a basis for restricting access to information.

“These amendments led to obtaining data from the Tax Administration and Ministry of Finance to become “mission impossible”, aded Đurnić.

“The most recent attempt to amend the Law on Data Secrecy, whose idea was to declare every information related to “functioning of the organ” secret is currently “on pause”, thanks to the strong reaction of the NGOs, but we do not know whether the Government will come back to that”, she said and aded that this was yet another Government’s attempt to facilitate the implementation of the authorities’ absolute high-handedness in deciding what the public has right to know.

“That is why the ongoing “Envelope” Affair, no matter how important, is only the top of the iceberg”, concluded Đurnić and added that this case showed how superficially Montenegrin institutions perform their role of preventing and prosecuting electoral frauds and corruption.

The panel “Frontrunner in a slow race? Montenegro’s EU integration path” organised Centre for Monitoring and Research (CeMI) in cooperation with the European Policy Centre (EPC) in Brussels, within the project “Raising CeMI’s Policy Expertise and Policy Impact on the National and International Level”, financed by Open Society Foundations – Think Tank Fund. The panel was also attended by Thomas Hagleitner, Head of the Montenegro Unit at the European Commission, Nikoleta Đukanović, Executive director of CEMI and Bojan Šarkić, Ambassador of Montenegro to the European Union.