Opinion of the Ombudsman’s office on gender discrimination in the Ministry of the Interior is a display of frequent violation of regulations on civil service relations, abuse of temporary and occasional business contracts, distortion of the spirit of certain laws. Despite certain provisions which are good, these laws are not able to protect the rights of women in public administration. We remind that appellant suffered discrimination on the basis of gender and family status (pregnancy) at work.

The statement of the Ministry of Interior on this case is even more worrying, because it shows absolute ruthlessness and open invitation for breaking the law: in a series of contradictory facts, it is claimed that employee preformed key tasks for functioning of the Ministry of the Interior Regional Unit in Bar (regarding ID cards, travel documents, citizens’ residences etc.), but that she was not hired in accordance with the Law on Civil Servants and State Employees and therefore has no rights arising from fixed-terms contracts.

We hope that this case will be resolved. However, we are convinced that this case is not the only one. As long as there is no harsher and proactive penalties for such gross violations of the law and abuse regarding employment, reaction of the institutions after public appearance of citizens will not change the system or substantially improve the position of the women and men in public administration. 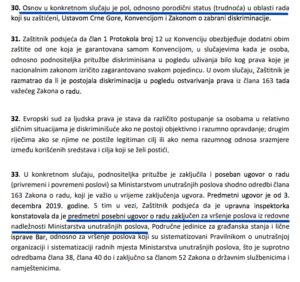 (Part of the Ombudsman’s opinion on this case, which says that employee was fired on the basis of gender (pregnancy) and that Ministry of Interior concluded contract for the works which have regularly and not temporary character).

Our reaction is also available at Vijesti’s portal.