Institute Alternative is one of the signatories of the CSO Declaration on Zagreb EU – Western Balkans Summit. 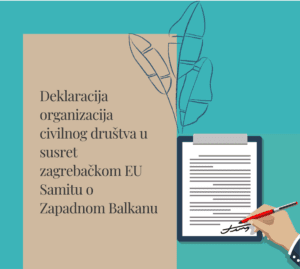 Over 90 leading civil society organisations from the Western Balkans, as well from the EU member states, working on issues of fundamental rights and the rule of law, democratic institutions, civic engagement, environmental protection, combating corruption and protection of migrants, adopted joint Declaration “With or Without (E)U” at their online shadow summit held on 5th may 2020.

With this title, organisations do not send a message to oppose EU enlargement – just the opposite. Civil society is still ready to work on the fight for human rights, rule of law, fights against corruption, economic development of the Western Balkan countries, but they want to hear and see the decidedness of the EU itself. The EU has its strongest partner in civil society (often stronger than in the leaders of the Western Balkan countries) and it is important that EU leaders are committed to that partnership as well as to the enlargement process.

In Declaration, civil society urge heads of states or governments of the European Union members states and of the Western Balkan countries to:

Civil society organisations also regretted that the Croatian presidency was not committed to working on the rule of law within the EU and emphasised that civil society in the Western Balkans wants to be involved in discussions about the future of Europe.

The whole text of the Declaration is available on this link.