State prosecutors and police officers from Montenegro and Serbia have recognized the institute of prosecutorial investigation as a more efficient and effective way of conducting the investigation. However, the cooperation between the two bodies, on which the results of the investigation depend, is still a challenge. This was concluded at a conference devoted to improving the joint work of the Prosecutor’s Office and the Police.

The two-day conference “Prosecutorial Investigation in the Western Balkans – Challenges and Solutions” was organized by Institute Alternative (IA) and the Association of Public Prosecutors and Deputy Prosecutors of Serbia, as part of a project supported by the Embassy of the Kingdom of the Netherlands. 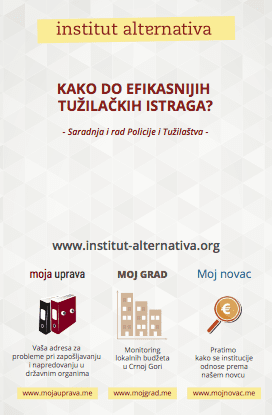 As part of the judicial reform, prosecutorial investigation has been introduced with new legislation on criminal proceedings, that has been in force in Montenegro since 2011, and in Serbia since 2013. Starting from the common challenges in the implementation of the new concept, state prosecutors and police officers from Serbia and Montenegro exchanged their experiences at the conference, reviewed the results of the prosecutorial investigation, as well as directions for further improvement of their joint work.

Stevo Muk, president of the managing board at Institute Alternative, while opening the conference, especially emphasized that “good cooperation” between the Police and the Prosecutor’s Office does not reflect in the absence of conflict and different opinions, but in active joint work that gives results. The accent must be put on the clarification of cases, the resolution of cases and the successful processing of perpetrators of offences, which is the responsibility of these two bodies.

Goran Ilic, president of the Association of Serbian Prosecutors, emphasised the importance of cooperation between the two bodies in order to reach the desired scope of judicial reform: “Without some kind of organizational unity between police and prosecution units, we will not have the real effects of prosecutorial investigation, especially in highly profiled cases.”

Professor Vojislav Đurđic pointed out that in Serbia “legal regulations cause overlapping of many powers of the prosecutor’s office and the police, resulting in an unclear division of roles”, and he especially emphasised the problem of duality in the course of conducting evidence-based actions. Therefore, the professor considers that the formality on a procedural level needs to be abolished, and instead of the pre-investigation and investigation, one informal phase should be introduced, which would make police relations with the prosecutors conducting the investigation clearer.

The findings of the research conducted within the project “How to make prosecutorial investigations in the Western Balkans more efficient?”were presented to the participants.

Dina Bajramspahic, public policy researcher at Institute alternative, presented results of the research in Montenegro, based on interviews with representatives of the police and the prosecutor’s office. She stated that most prosecutors and police officers have positive attitude towards this kind of investigation, which was not the case in the previous period, but that there are still differences in interpretations and the shifting of responsibility for the lack of results.

Sandra Kulezić, a member of the Council of State Prosecutors of Serbia, presented the findings of a survey conducted by interviewing prosecutors and police officers in Serbia. As in Montenegro, the research has shown that both police and prosecutors consider prosecutorial investigation a good concept. However, respondents agree that the introduction of this institute is not accompanied by the necessary resources for its implementation.

Dejan Knezevic, head of the Department for the Fight against Drugs and Smuggling at the Police Directorate of Montenegro, stated that this institute has been well applied in Montenegro, as well as police cooperation with prosecutors, especially senior and special. He emphasised experience and professionalism as the key conditions for successful prosecutorial investigation, and stated that at the time of the transition to this type of investigation, all participants were not fully prepared, but they trained through its implementation.

The challenges regarding the leadership role of prosecutors were considered as well, i.e. whether they are caused by lacking of prosecutors’ proactivity or control over police representatives. Thus, Ana Borovic, a representative of the State Prosecutor’s Office in Belgrade, emphasised that police officers fail to act upon the orders of the prosecutor’s offices, when they differ from the orders of the chief of police.

The conference was attended by 45 prosecutors and police officers from Serbia and Montenegro, where a two-year project was completed with the support of the Kingdom of the Netherlands Embassy. The final results will be presented in a publication later this year.