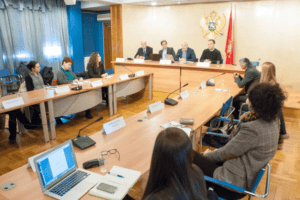 Dina has presented Institute alternative’s research finding, regarding results of the public control of the police from report called ’’Police integrity assessment in Montenegro’’. She gave suggestions for improvement of the work baring in mind recently appointed members of the Council.

Dina pointed out that the Council has the poorest legal jurisdictions in relation to the other police control authorities and that this issue has to be changed. Because of the Council’s great enthusiasm and its willingness to do its work well, balance should be made regarding strengthening jurisdictions. She has also pointed out that there is a lack of information on the implementation of the conclusions and ratings. Therefore, it is only natural that the Parliamentary committee for security and defense is partner to the Council.

She has also criticized Council’s budget and remarked that it has been on the low level for years.

Report from the conference can be found in its entirety here (in Montenegrin only).