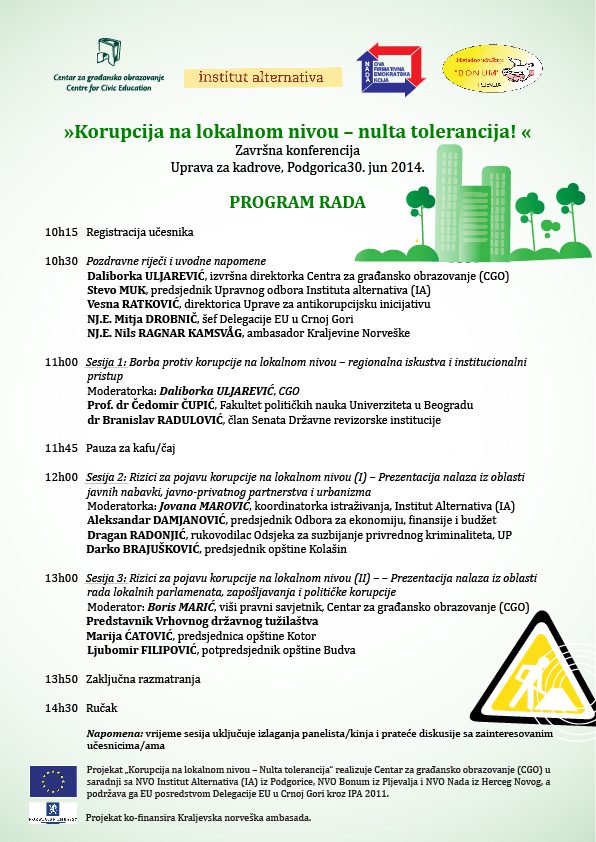 The Closing Conference within the framework of the project “Corruption at the Local Level – Zero Tolerance!”, supported by the European Union through the EU Delegation to Montenegro and IPA 2011, and co-financed by the Royal Norwegian Embassy, was held on Monday, June 30.

During the past 18 months, this project was jointly implemented by Centre for Civic Education (CCE), Institute Alternative (IA), NGO Nada, and NGO Bonum.

During the implementation of this project, the focus was placed on identifying key issues in the high-risk corruption areas at the local level. It resulted in formulation of the proposal of priority measures for improvement that have been defined within six studies, a guide for local officials and councillors, and four monitoring reports on the implementation of local action plans for fight against corruption.

In accordance with its programme orientation and activity areas, Institute Alternative prepared a set of recommendations for improving legal and institutional framework, and practice in the area of public-private partnerships and concessions, public procurement, and employment at the local level.

Opening remarks and the conference keynote speeches were given by Daliborka Uljarević, Executive Director of Centre for Civic Education (CCE), Stevo Muk, President of the Managing Board of Institute Alternative (IA), Vesna Ratković, Director of the Anti-Corruption Directorate, H.E. Mitja Drobnič, Head of the EU Delegation to Montenegro, and H.E. Nils Ragnar Kamsvag, Ambassador of the Royal Norwegian Embassy.

In his speech, Stevo Muk underlined that corruption remains a widespread 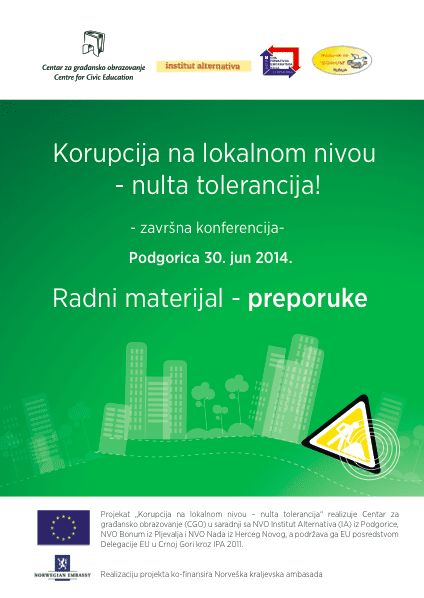 problem and a burning issue in the EU negotiation process. It is in fact the process of accession of Montenegro to the European Union that has raised the issue of necessity of making adjustments at the local level as a response to the challenges that will be brought by the full membership in the EU. Namely, a great part (about two thirds) of the EU Acquis, with which it is necessary to harmonize domestic legislation in its entirety, is implemented at the local level.

He reminded that there is a need for higher level of functional and fiscal decentralization, establishing a quality system of human resources development and management of human resources policy, as well as improving transparency of work of the local governments and allowing for greater participation of citizens and stakeholders in the conduct of public affairs, as stated in the Strategy of Public Administration Reform in Montenegro 2011-2016.

The first panel, dedicated to presenting regional experience and institutional approach, was moderated by Daliborka Uljarević, while the panelists were Čedomir Čupić, professor at the Faculties of Political Science in Belgrade and Podgorica, and Branislav Radulović, PhD, member of the Senate of the State Audit Institution.

The second panel provided an overview of the identified corruption risks in public procurement, public-private partnerships, and urban planning. It was moderated by the Research Coordinator at IA, Jovana Marović, who also presented recommendations for improvement of the current state of affairs in these areas. Panelists at the second panel were:

Recommendations for improvement in the field of work of the local parliaments, employment at the local level, and combating political corruption, were presented at the third panel. The moderator was Boris Marić, Senior Legal Advisor at Centre for Civic Education (CCE), while the panelists were Marija Ćatović, Mayor of the Municipality of Kotor, and Ljubomir Filipović, Deputy Mayor of the Municipality of Budva.