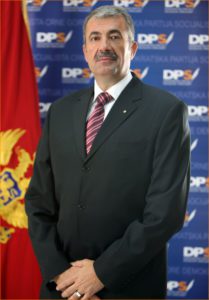 We appeal to the members of Committee for Economy, Finance and Budget not to vote for Zoran Jelic, during appointment of new member of the Senate of the State Audit Institution (SAI).

Zoran Jelić has done nothing to be considered worthy of the lifetime position as a member of the Senate of one of the key supervisory institutions in Montenegro, but has done plenty to be disqualified from this appointment.

Apart from the fact that his name is synonymous with the “Recording Affair“ and misuse of public funds for political purposes, Jelić has been breaking the law for many years, by being Member of the Parliament and civil servant in the Employment Agency of Montenegro, with full salaries in both positions.

We doubt that Zoran Jelic meets all the criteria prescribed by the Law on SAI, as a member of the Senate, primarily audit exam. Therefore, Institut Alternativa has requested all the documentation that candidates have enclosed with their applications from the Parliament, as well as special documentation from SAI, on passed audit exams by the candidates. In the case of such an important appointment the greatest degree of transparency of the process must be ensured, and the public must be allowed access to all the documentation included in the application of the candidates.

After more than a decade of work, there is still room to strengthen the SAI – it lacks capacities, knowledge, impact, but most of all prominent and professional individuals who will guide its future development and provide a good example by their own integrity. Appointment of Jelić to the Senate would be a strike to the independence of SAI and quality of its work, and beginning of potential abuse for party purposes, when it comes to choosing the audit topic or concerning the relations with subjects of audit.

We call to the MPs to bear in mind only the greater goal of future development of SAI, as key ally to the Parliament in budget control, during this appointment, as well as the need for the new member of Senate to be the epitome of professionalism and integrity – everything that Jelić is not.