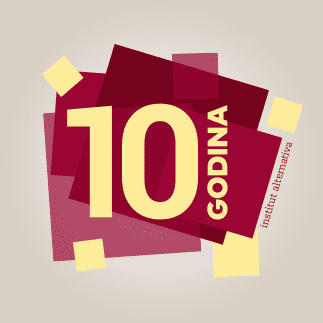 During the ten years of its existence, Institute Alternative realised its ideas through 84 projects with the aim of creating preconditions for better governance, effective expenditure of citizens’ money, better control of executive authority and security services, as well as better parliamentary control. The results of our research are summarized in 84 studies, reports and analyses, and the decision-makers were addressed 1036 recommendations. Over four thousand times we communicated our proposals and recommendation to the media for better quality public policies.

The overall budget since the foundation until this day amounts to ‎1.138.427 euros, out of which the majority of funds are from over 20 international organisations and embassies, while the percentage of the funds obtained from the state of Montenegro is 9,1%, which is overall 104.148,56 euros. In the same period, the Institute paid 192.633,32 euros in taxes, which makes up to 85% of funds more than it got from the state for the realisation of its projects.
The development of our organizational capacity over six years was supported by the Open Society Foundation – Think Tank Fund.

We started three internet pages. My town is a pioneer endeavour of visualisation of budgetary data of local self-administrations. My Administration followed, which serves as an address for all those citizens that have encountered a problem when interacting with public administration and its service delivery system. The newest internet portal, My Money, is a result of the intention to make all that “locked“ and unsearchable data available.
Institute Alternative provided suggestions and comments to 12 strategic documents and 24 national and local legislative acts, and we also participated in 25 working groups for the development of legal and strategic documents, as well as for the chapters within the negotiation process with the European Union. Our researchers actively participated 14 times in the work of parliamentary bodies, during discussion on draft laws, as well as during control and consultative hearings.

Institute Alternative regularly publishes information on its finances, projects and donors who have supported its work. Due to this, Institute obtained five stars for transparency from three years in a row from the international non-for-profit organisation Transparify that grades the transparency of over 200 research centres.

Our organisation consists of a 10-member team, but over the years the Institute cooperated with 46 people, to whom we are grateful for their time, dedication and the knowledge that they selflessly offered to the organisation.