Institute Alternative (IA) organized the Fourth Generation of Public Policy School at the hotel “Queen of Montenegro” in Bečići, from 7-9 November 2015. Nineteen policy makers from Montenegro have undergone an intensive programme, consisting of lectures, workshops and training. The School aims at providing the participants with adequate knowledge and skills to analyze public policies, design and conduct research, write policy papers, formulate recommendations for decision-makers and advocate for those recommendations.

The Fourth Generation of Public Policy School gathered 19 participants including public servants in the Government bodies, public servants in the local self-governments, employees of the Parliamentary Service, as well as representatives of NGOs, media and diplomatic missions to Montenegro. The participants had an opportunity to familiarize themselves with the key aspects of formulation, analysis, implementation, monitoring and evaluation of public policies. During the course of our School, the following topics were discussed as well: the policy-making process in the Montenegrin public administration, the role of think tanks in public policy, and the role of state and non-state actors in the policy-making at the EU level.
Welcoming remarks were delivered by Jovana Marović, PhD, research coordinator at Institute Alternative. She stressed that this generation marks the highest number of applications received so far. This speaks highly of the quality of our programme, but also shows continuing interest of representatives of different sectors and institutions in developing knowledge and skills in the area of policy-making.

The introductory topics – definition of public policy and stakeholders, instruments and phases of policy creation were presented by Tihomir Žiljak, PhD, professor at the Faculty of Political Science at the University of Zagreb. The participants were especially interested in clarifying similar terms whose meaning is often misused in formulating public policy, like output, outcome and impact on one side, and politics, policy and polity on the other.

Professor Žiljak stressed that the policy process can have clear objectives and phases. In this case, the so-called phase approach is most commonly used. It consists of the following five phases: agenda setting; formulating options; selection of the best option, i.e. adoption of the political decision on how the problem will be solved and which instruments will be used; implementation of the decision adopted; and, in the end, evaluation of the chosen policy option. However, in everyday life phases of the policy process are not usually this clearly separated. Therefore, this “five-phase heuristics” represents a prescriptive model of policy-making. Nevertheless, in reality, it often occurs that there is not enough knowledge, time or political support for a particular policy decision. In that case, the incremental approach is implemented, which implies responding to current circumstances and finding solutions based on the principle of trial and error.

During the second day, the focus was placed on the most disregarded phase of the policy cycle – evaluation of public policies. Lectures and workshops were lead by Dragiša Mijačić, MA, director of Institute for Territorial Economic Development (InTER) and PhD candidate at the University of Maastricht.

Within the group exercise, the participants tried to identify public policies in the newspapers and to assess which of the five stages of the policy cycle have the identified public policies reached. Based on the results presented, it was concluded that the attention of the decision makers and the media is not focused on the evaluation of public policies.

During the lectures, special emphasis was placed on the differentiation between concepts of monitoring and evaluation, as well as between input, output and outcome. The lecturer also discussed the purpose of the evaluation process and presented a variety of purposes for which the evaluation may be performed: ethical, managerial, decision-making purposes, as well as educational and motivational purposes. In addition, Mr. Mijačić presented different forms of evaluation – ex-ante or prospective, such as, for example, feasibility study; formative evaluation, such as mid-term evaluation; and summative or impact evaluation. Criteria for evaluation were also discussed while special emphasis was put on the implications of evaluation of public policies and the usage of a specific type of evaluation – Regulatory Impact Analysis (RIA) in Montenegro.

The following lecture was given by Vladimir Pavićević, PhD, professor at the Faculty of Political Sciences of the University of Belgrade. Mr. Pavićević talked about the methodology of academic writing and the difference between writing academic papers and writing policy papers. A special focus was placed on academic integrity, i.e. the obligation to respect other people’s work when developing policy proposals.

The second working day was continued with the lecture given by Dragan Đurić, PhD, professor at the Faculty of Political Science of the University of Montenegro and programme manager at the Regional School of Public Administration (ReSPA). While presenting the process of policy-making at the Montenegrin public administration, Mr. Đurić particularly highlighted the impact of good governance on sustainable economic growth. He indicated the importance of the South East Europe 2020 Strategy and its additional, cross-cutting pillar “Governance for Growth”.

The third working day began with the lecture delivered by Jovana Marović, PhD, research coordinator at Institute Alternative (IA). Ms. Marović spoke about the political system of the European Union, the supremacy of EU law, and the manner in which acts like regulations, directives, decisions and recommendations are implemented at the national level. In addition, she presented the work of think tanks and the main differences between these organizations and other types of NGOs. This presentation was followed by a workshop on different techniques of advocacy, during which the participants were divided into two groups and were tasked with presenting one policy problem through advocacy process, thus defining the content of the message they wish to communicate, the actors who will be the senders of the message, as well as the language and format in which the message will be communicated.

Vladimir Pavlović, coordinator of the Centre for European Integration of 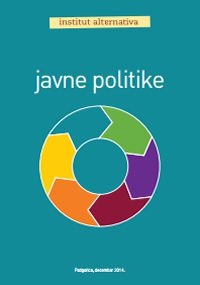 Belgrade Open School (BOŠ) and certified trainer for Policy Paper Writing (LGI Budapest), held the training on writing effective public policy papers. During this session, the focus was placed on the role of policy proposals in decision-making, the manner of structuring and creating coherent policy proposals, as well as on strategies for writing and further usage of policy proposals.

As the main reading, the participants used the collection of papers of the lecturers within Public Policy School entitled “Public Policies”, which was published by Institute Alternative in 2014. Numerous additional readings were provided by the lecturers in electronic form. The program was closed by delivering certificates of attendance to the participants.

The project Public Policy School is funded by the Commission for Allocation of Revenue from Games of Chance. The School is licensed as an official program for the acquisition of knowledge and skills in the field of public policy by the National Council for Education of Montenegro.

The call for participants of the Fifth Generation of Public Policy School will be announced in the second half of 2016.