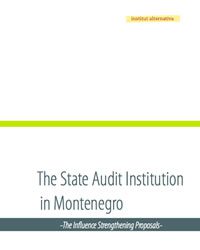 State Audit Institution (SAI) is independent and supreme authority of the state audit established by the Law on State Audit Institution in April 2004. It is institutional, external, independent, professional and impartial control of the budget expenditures and state property management in Montenegro. SAI issued 46 audit reports so far: six reports on the Final Statement of the Budget of Montenegro and the rest on individual audits. With enlargement of the SAI’s capacities and implementation of demanding new audits, the total number of audits steadily grows with every year.

Members of the Parliament, representatives of the executive authorities and international organizations often publicly compliment the SAI and its work. There hasn’t been significant contribution to the work of SAI by the NGOs in Montenegro so far.

Taking all stated facts into account, our opinion is that it is time to give more objective review of the SAI’s work so far, its position in institutional framework, ways other authorities use the conclusions of this institution and last but now least the over whole results of its work so far. Institute Alternative (IA), with the support of the European Fund for the Balkans, conducted the project “Towards the best EU practice: Strengthening the Influence of the External Financial Control in Montenegro”. Project includes analysis of the legal framework of the financial control, capacity of the State Audit Institution (SAI) and the quality of the inter-institutional cooperation. The goal of the project and this publication as its direct product, is to provide recommendations whose implementation could lead to the improvement of SAI’s work and thus its influence on the system of public finance.

The materials used for this investigative report are the conclusions from the interviews conducted with representatives of the audited entities, SAI, Ministry of Finance, the State Prosecutor’s Office, Public Procurement Directorate, District Authority for offenses Podgorica and Members of Parliament Committee on Economy, Finance and Budget. We also used press clipping materials and articles on SAI from the print media IA have been collecting over the past years . We have taken into account the comparison with the practice and the legal framework of the state audit institutions in selected countries in this region (Croatia, Bosnia and Herzegovina and Macedonia). During the research we made a constructive cooperation with the SAI and issued basic questionnaire consisting of thirty questions and a demand for gaining access to the information, and interviewed Heads of the Sectors.

This analysis contains the recommendations mainly issued to the SAI, but also to the other members of the process of control of the public expenditures in Montenegro. Beside its main goal to influence the accountable decision makers to implement new solutions into a legal framework and practice, this analysis should contribute to the number of works on external audit in Montenegro.

It is a good opportunity to solve certain issues that posed a great burden to the work of the SAI before the upcoming amendments to the Law on State Audit Institution planned for 2011. The importance of further efforts on strengthening the capacities of SAI was also highlighted by the European Commission in the Opinion on the Application of Montenegro for Membership of the European Union as one of the seven key priorities to be fulfilled if Montenegro is to start accession negotiations.