Skip to content
Institute Alternative » Publications » The Lipci Case: How not to repeat it 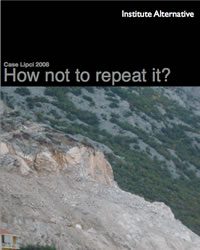 More than a year has passed since the Montenegrin media have started to report about the case of serious devastation of environment in the region of Bay of Kotor (Bokokotorski zaliv), near the small seaside place Lipci, where 4200m2 of the sea area has been illegally banked.

After the Ministries and their inspections could not agree upon the issue of who has the jurisdiction over the case for months before the eyes of Montenegrin public, the police has stopped the construction works, prosecutor has raised charges against several persons, and the Basic Court in Kotor has ruled verdicts, sanctioning four persons concerning the case.

However, the question of how was it possible that no state institution, in particular inspection services, did not assumed responsibility for the case and prevent the devastation. Later cases of smaller scale are indicative for assessment that in the meantime, almost nothing has changed.

Therefore, the primary purpose of our research is to provide an answer to the question: What to do so that the Lipci case does not repeat?

With that aim in mind, we want to give the public a comprehensive overview of the case, events, actions of state bodies, statements and activities of other institutions and organizations, and then to determine the key problems, their causes and consequences. At end, we want to offer the public, but first and foremost decision-makers, the proposal to create such a legal framework and ambient that will significantly reduce the possibility of a similar case happening again.

Methodology of the research included analysis of the media reports, access to information in the possession of the state administration as well as the review of the legal framework. Draft version of the document was distributed to certain state administration bodies in order to receive their stances, comments and suggestions. The research was conducted in the period May-October 2009.