Gender mainstreaming of public policies is not at a satisfactory level in Montenegro, the institutional framework in this area is still flawed, and the increased legislative initiative of MPs is accompanied neither by elaborate procedures for public participation nor by a gender analysis of laws.

Our Nikoleta Pavićević pointed out the aforementioned today when she took part, on behalf of the Institute Alternative (IA), at the session of the Gender Equality Committee in the Parliament of Montenegro. At the session, experts in collaboration with the Organisation for Security and Co-operation in Europe (OSCE) presented the questionnaires for examining gender mainstreaming of legislative acts along with examples of ex-post analysis of selected laws. 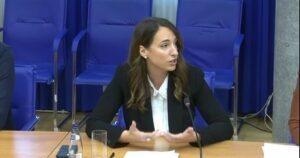 The absence of targeted, participatory, and inclusive public discussions and consultations also contributes to the weak incorporation of the gender perspective into laws and strategies. Ministries do not act proactively but fulfil what is the legal minimum – the publishing of calls for participation on the webpage of a ministry and eUprava and in one newspaper that is not particularly read. Additionally, it is concerning that out of 69 valid strategies in Montenegro, only 29 were publicly discussed, while none of the 18 ministries has published a list of acts for public discussion for 2022 – stated Pavićević at the Committee session.

Nikoleta pointed out that the process of drafting legislative solutions by MPs is even less transparent and even less inclusive compared to the process of adopting laws by the Government. “This is especially important considering that the IA analysis showed there is an increased legislative initiative of MPs this year – MPs submitted as much as 40% of the total number of laws in the Parliamentary procedure”. However, these draft laws have not been accompanied by elaborate procedures, necessary analysis of the fiscal impact and the influence on women and men. Moreover, consultations with the interested and expert public are missing.

“Therefore, we need a more (pro)active role of the Parliamentary Service in conducting extensive analysis that should precede MPs’ major decisions. We notice that the Parliamentary Institute is being more intensively relied on for the conduct of research in the area of gender equality. However, this topic remains ‘ghettoised’ and reduced only to the Gender Equality Committee, while the essence of gender mainstreaming is that it permeates all sectors and that each Committee within its competence analyses the impact on women and men,” concluded Nikoleta Pavićević at the Committee session.

You can watch the Committee session at the following link: