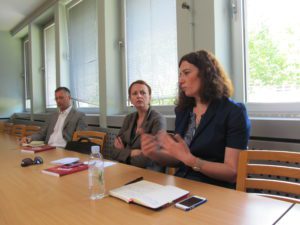 Research Coordinator Jovana Marović, participated in the symposium “Elections for the European Parliament – Through Mandates for a Greater Impact?“, which was held on 15 July 204, at the Faculty of Political Sciences in Belgrade.

The conference aimed at offering an analysis of the institutional and political outcomes of the European Parliament elections held in May 2014 from the perspectives of different academic disciplines. Therefore, it was divided into three panels within which the following topics were discussed: the election results and the new party structures within the European Parliament; changes in the inter-institutional structure of the EU following the elections; as well as the possible contribution of the election process towards exiting the structural and economic crisis the EU has been faced with for a long time.

The academic conference was organized within the project “Jean Monnet Module – Constitutional Politics of the European Union”. As a result, proceedings of the participants of the conference will be published.