This year’s European Commission Report confirmed the importance of the political level of the accession process of Montenegro to the EU and should serve as yet another appeal that, without political support, small steps at the technical level do not produce the expected results.

Like every year, we translated the usual grades from the report into a numerical scale from 1 to 5.

The rate of readiness, i.e., normative compliance with the EU standards, is 3.12 (compared to 3.11 from last year), while the rate of progress, which involves changes vis-à-vis recommendations and specific conditions in the previous year, is 3.15 (compared to 3.03 from last year). Backsliding was not identified in any chapter, while five chapters earned a rating of good progress. We did not receive a single excellent grade (5), and no stagnation was identified, unlike last year when it was noted that there was no progress in the field of judiciary.

Since 2015, the European Commission has been applying two levels of assessment – “state of play” and “assessment of progress”. The former level refers to the assessment of the overall state in the fields covered by certain chapters, while the latter focuses on the separate assessment of the progress achieved in the previous 12 months, i.e., since the publication of the previous report. Possible grades for the overall status are “early stage, some level of preparation, moderately prepared, good level of preparation and well advanced”. “Backsliding” is the lowest score that can be received on the second basis (progress), followed by “no progress, some/limited progress, good progress and significant progress”.

Nevertheless, this year too, the oscillations in our readiness and progress are measured in decimals, which confirms the overall impression of stagnation and the impotence of political elites to make a breakthrough ten years after the start of negotiations.

We recall that Montenegro has already been negotiating twice as long as the countries that last joined the EU (Croatia, Bulgaria, Romania). We still have not managed to come close to the fulfilment of temporary benchmarks in Chapters 23 (Judiciary and fundamental rights) and 24 (Justice, freedom and security), and thereby “de-block” negotiations in all other areas. The European Commission particularly points out that reforms and decision-making are hostages to the inability to reach a political agreement. Unlike last year’s report, which mainly focused on the events until July 2021, this year’s report included the events ending with September 2022, especially those that negatively impacted the functionality of the judiciary. 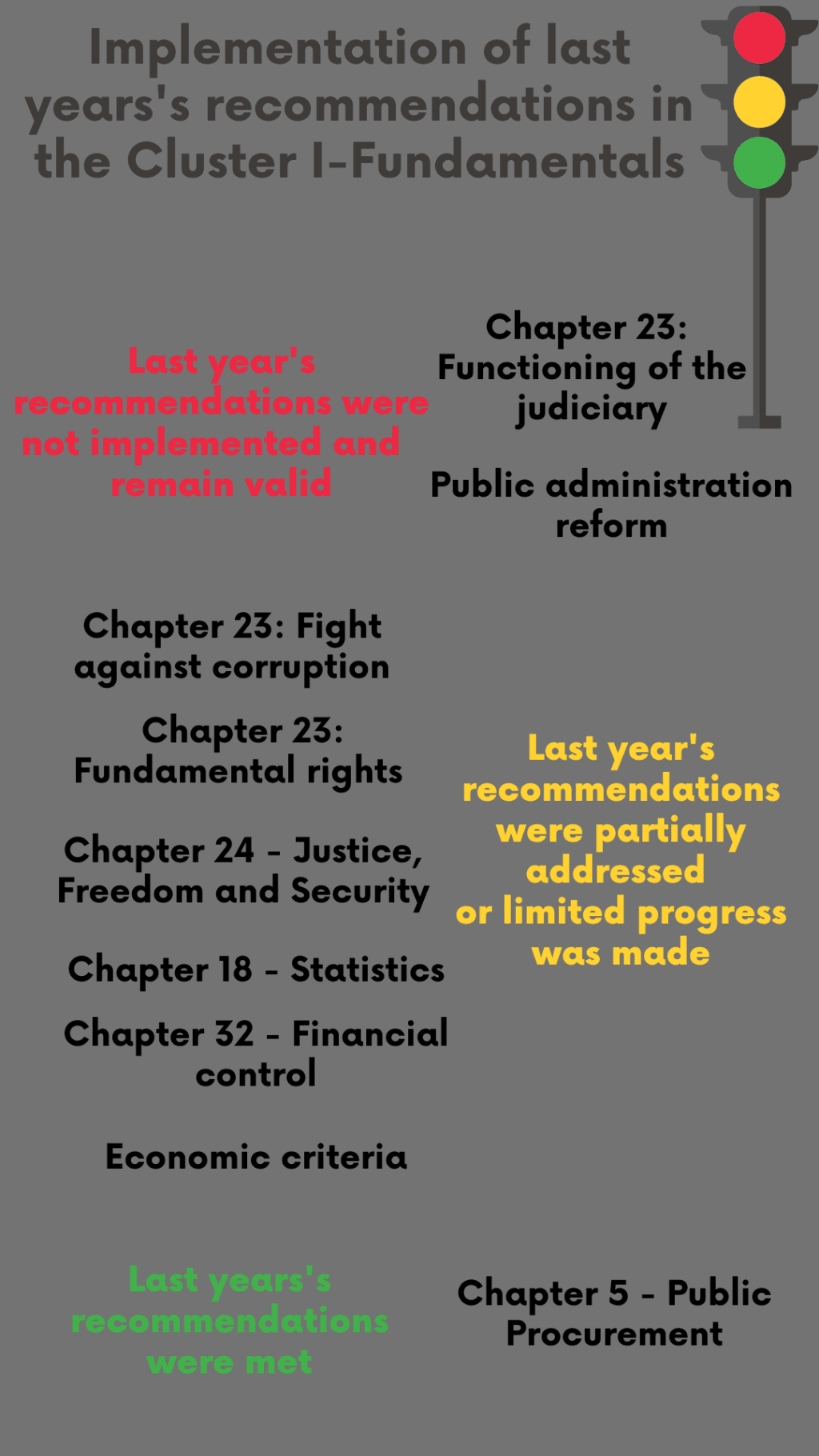 Since the adoption of the new EU enlargement methodology, the chapters have been divided into six clusters. The most important cluster refers to the fundamentals (23: Judiciary and fundamental rights, 24: Justice, freedom and security, 5: Public procurement, 32: Financial control, 18: Statistics, as well as to the functioning of democratic instructions, economic criteria and public administration reform). Without progress in this cluster, there are no significant steps in the overall negotiation process. However, Montenegro has not fulfilled most of the recommendations from the previous year in the framework of this cluster, except for public procurement, so the European Commission mostly repeated them in the new report.

Yet, the Report also pointed to some new recommendations and priorities that the Institute Alternative has highlighted in previous years, such as the need to:

The Report is also an echo of numerous criticisms addressed to the decision-makers by the media and the NGO sector in the previous period. Amongst other things, the Report apostrophises the fact that the 42nd Government made important senior appointments during its technical mandate, which is a practice continued by the current, 43rd Government, which has also lost confidence. The 42nd Government’s practice of making decisions without previously holding sessions was especially noted, and it was pointed out that the key recommendations for electoral reform have not been addressed. It was also emphasised that MPs frequently adopt laws without the necessary financial impact assessments, and that despite the improvement of procedures, the control role of the Parliament has not been significantly enhanced. The European Commission has called for the adoption of amendments to the Law on Free Access to Information, intending to improve transparency that—except for the praise of the practice of publishing state budget spending–remains a challenge.

See how the European Commission evaluated the progress in certain chapters this and in previous years: