The work of the Parliamentary Committee on Security and Defense in 2018, in addition to the insufficient implementation of control mechanisms, was characterized by inactivity, when it comes to Parliament’s legislative role, this parliamentary body must find a way to contribute to security sector reform, otherwise it will lose its authority. 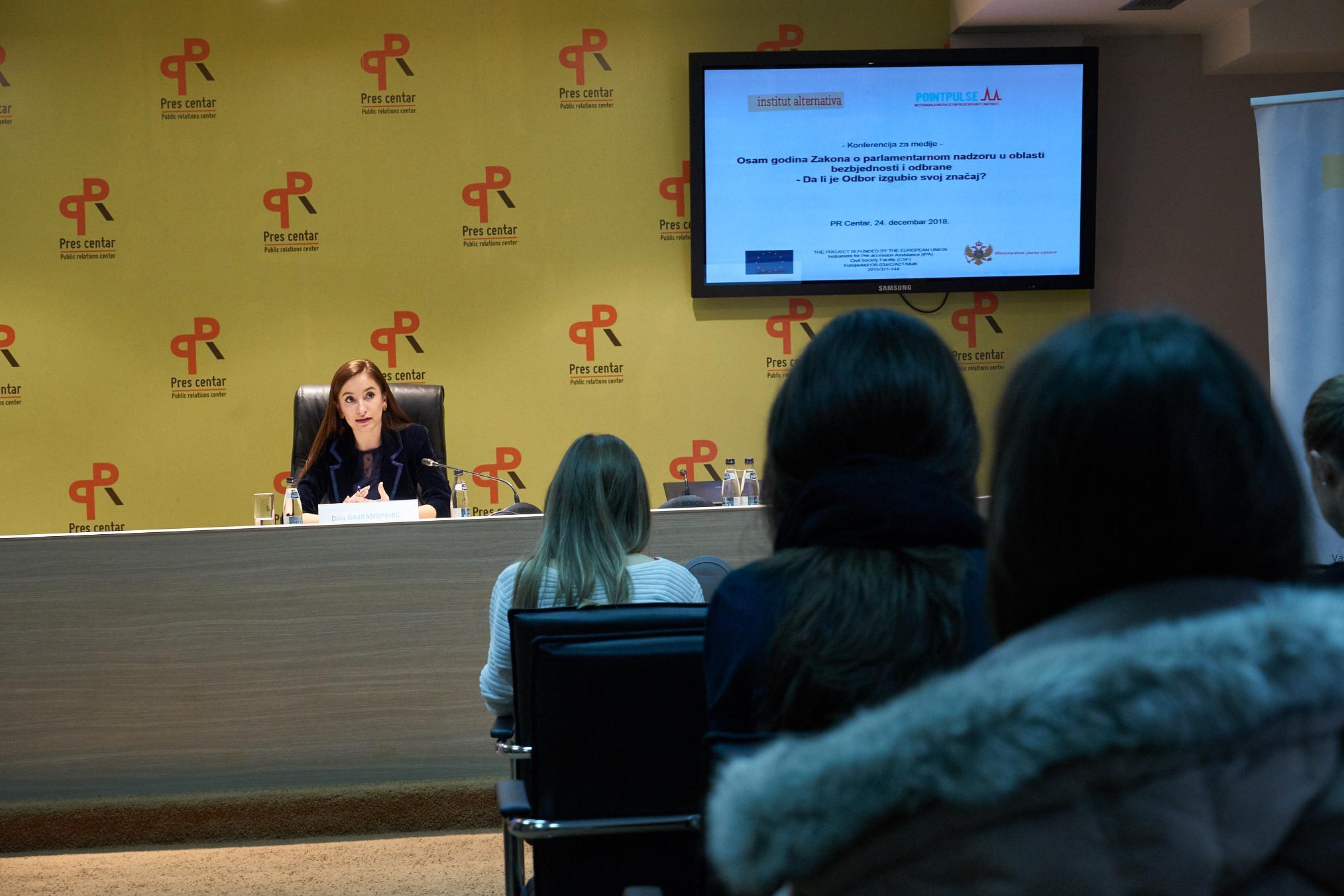 This was announced at a press conference of the Institute Alternative (IA) ”Eight years of Law on Parliamentary Oversight of Security and Defense Sector – Did the Committee lose its significance?’’, organized within the POINTPULSE project, funded by European Union.

Dina Bajramspahić, public policy researcher at IA, reminded that Montenegro was the only country in the region that regulated this area by the Law on Parliamentary Oversight of Security and Defense Sector in 2010, explaining that the legislator’s intention was to straighten the control role of the Parliament of Montenegro and more efficient oversight of the security and defense sector.

”However, our opinion is that every MP of the Parliament of Montenegro, whether he is an opposition or a member of the ruling majority, has the same rights and obligations to implement the constitutional role of the Assembly, which has three functions (representative, legislative and control function). In this regard, the responsibility of all members of the Committee and all of the MPs is equal and we consider that everyone is equally responsible for the work and shortcomings of the work of this Committee and the Parliament’’, said Bajramspahić at PR Center.

According to her, although it is clear that there are shortcomings in the in control function in the absence of the opposition, monitoring of the work of the Committee in this year, she pointed out, showed that this Committee was not active even when it comes to the legislative role of the Parliament.

‘’This year, the Committee held 19 sessions and one joint session with the Gender Equality Committee. The 16 sessions were open to the public, which was very positive, while the three were closed.

The Committee held only one control hearing and only one consultative hearing. The committee also held five hearings in the procedure of appointing military-diplomatic representatives and the director of the police”, said Bajramspahić.

The Committee, as she added, considered 27 expert items on the agenda and adopted 31 conclusions on them.

”Only three of the 19 sessions were held at the initiative of the members of this Parliamentary body, while all others were held after the Governments and other bodies, in accordance with their legal obligations, submitted the relevant acts to the Assembly”, Bajramspahić said.

She explained that one session was held at the initiative of the Gender Equality Committee, while, as she said, a consultative hearing was held after the Organization for Security and Co-operation in Europe (OSCE) expressed its interest in the implementation of the binding decisions of the Ministerial Council.

”Two out of the three sessions that were held on the initiative of the Committee itself were tehnical, dealing with the consideration of the Report on the work of the Committee of Security and Defense Sector for the previous year and the adoption of the Parliamentary Oversight Plan for the next year, and the activity that was crucial when it comes to the control role of the Committee in 2018, was related to the hearing about the wounding of the journalist Olivera Lakić, who works at Vijesti”, said Bajramspahić.

She believes that all of the mentioned confirms that the Parliamentary oversight came into the stagnation phase and routine consideration of the material coming from the Government, assessing that members of the Committee have neglected the possibility of self-interest in important issues in the security sector.

”We should have in mind that the Committee is the one that has the role of the controling authority, and the executive authority is the one under supervision. However, the agenda of the Committee shows that the Government is the one who has the initiative, sending materials for consideration, while the Committee passively accepts these documents”, Bajramspahić warned.

She said that the Committee maintained on the level of rulebook authorizations, mainly dealing with the reports on the work of institutions, and that, as she said, Committee rarely uses its special authorizations, control mechanisms, control hearings, control visits, which was made possible to Committee by the Law, ”and by this Committee differs from other parliamentary bodies whose work is regulated by the Rule of Procedures of the Parliament”.

She said that during this year, the Committee did not control any measures of secret surveillance, applied by National Security Agency”, and not only this year, but since 2010.”

”The Committee also did not deal with the measures of secret surveillance applied by Police Administration since 2012 at the premises of these bodies. The Committee also did not request special reports on the application of these measures, although the Law specifically mentions that jurisdiction. The Committee did not control National Security Agency on any issue in the premises of this body since 2010, although it is one of the few supervisory bodies that can and must do it on behalf of citizens”, said Bajramspahić. 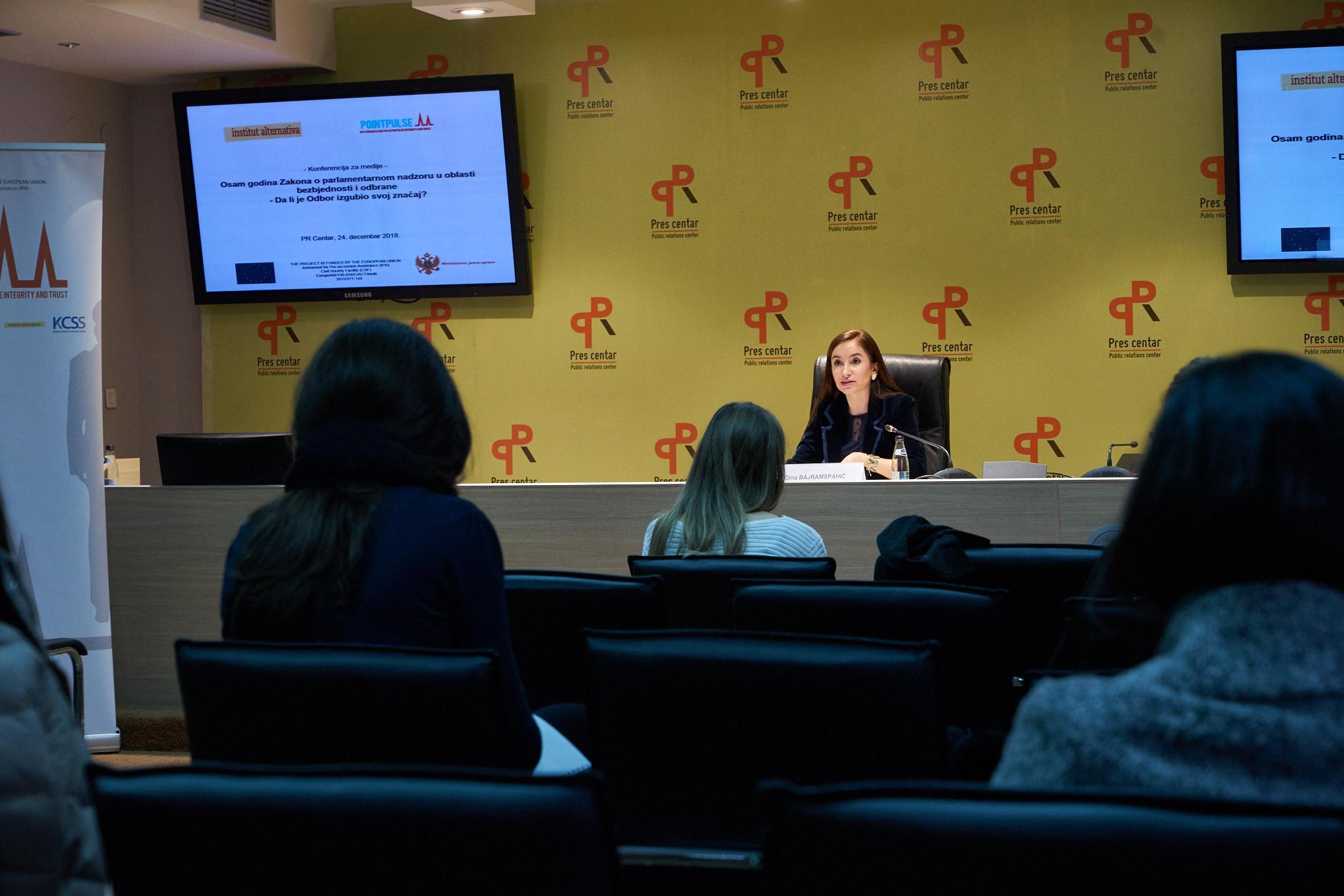 She said that the Committee did not deal with the problems of police torture and abuse, nor did, as she said, ever dealt with the situation in the prison system.

The Committee, she added, did not deal with public or secret procurement of the security sector, and it no longer deals with foreign trade in controlled goods.

”This year, the Committee did not deal with the situation in the field of air traffic safety and airspace, nor the establishment of an integrated miritime control and surveillance system, nor an efficient and integrated maritime safety system. The Committee never considered the Police Development Strategy with accompanying action plans, as well as a number of other strategic documents related to the work of the Police and other bodies”, Bajramspahić said.

She explained that these were only potential topics that had to be an integral part of the regular work of the Committee, and that the members of that body had to proactively be interested in them.

She said that the Committee reviewed the Report of the State Audit Institution on the control audit of the Ministry of Internal and the implementation report for 2017 of the Action Plan for the implementation of the UN Security Council Resolution 1325 Women, Peace and Security, which was implemented at initiative of the Gender Equality Committee.

”The first eight out of the nine reports, are reviewed each year, and the institutions submit them by their legal obligation. Only two reports were considered at the initiative of the State Audit Institution and the Gender Equality Committee. The first eight reports were considered in June, which is timely because these are reports that relate to the previous year and this is positive thing in the work of the Committee”, said Bajramspahić.

She said that it was not good that the Committee continued with the unified practice of discussing several reports at the meetings of the Committee.

”Thematic discussions on specific issues have not been introduced, which leads to the generalization of the debate, which makes it difficult for MPs to come up with concrete recommendations to improve the situation in the security and defense sector”, said Bajramspahić.

”The Committee considered only three laws this year, two of which are regular – the final account and budget proposal for the Ministry of Internal, the Ministry of Defense and the National Security Agency. The only law that the Committee considered, and which was not regular, is the Government’s Proposal of Law on Protection of Persons and Property, in which no member of the Committee had any intervention”, Bajramspahić said.

According to her, while on the one hand it is understandable that in the absence of the opposition, the ruling majority will not be confronted with the government officials and executive authority policies, it remains unclear, as she said, why the Committee is passive when it comes to its legislative function and does not contributes to addressing security and defense sector issues by more active creation of good legal solutions and policies for this sector.

”The Committee must find a way in which, even in this constellation of forces, when the Government has a relatively stable majority in the Parliament, it performs its role in the law and gives a certain contribution to security sector reforms. Otherwise, they will only seize government decisions, lose all the authority that he had and derived from the law”, said Bajramspahić.

She said that the IA has prepared 13 recommendations that will be submitted to the Committee for the purpose of more active parliamentary oversight of that body in the next year.