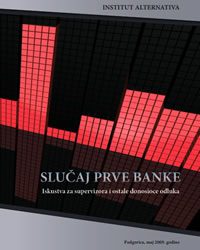 The First Bank of Montenegro founded in 1901, the newly acquired name, was an insignificant bank, located in the workers town in the central part of the country until 2006. Next couple of years, this bank succeeded to increase its assets by 24 times, through supervisory non-approved investments in the bank’s share capital from large number of local businessmen and high level political profiles, accompanied by aggressive and not always competitive-driven attraction of deposits from the clients. In less than two years it managed to replace the end of the banks’ market share list with the second place among the reputable and strong competitors. Aggregately, this provincial bank suddenly received abundant funds for unsustainable expansion and implementation of business illusion that only with a strong marketing campaign and with a team of managers who had little or doubtful working experience in banking business could achieve, in very short time, strategically unfeasible ambition to take over the leading role in the banking system.

The first risk-bearing market signs about limited liquidity and solvency of FB MN 1901 were noted in the beginning of 2007; more transparently in the beginning of 2008, as the bank constantly was failing to execute domestic and foreign payments’ orders from clients. Almost by the end of 2008, relevant institutions were too slow and passive to publicly acknowledge the crisis and to face with the system’s disruption caused by the FB MN 1901 insolvency. Furthermore, the situation resulted in systemic risk of the country’s banking sector, that recalled unpleasant memories from the ‘90s when savings “disappeared” from banking balance sheets leaving clients with nominal figures on the accounts, and had strong negative impact on reputation of the country’s overall financial system with significant deposits’ withdrawal.

The legislative solution regarding the protection of banking sector from negative effects of global financial crisis was adopted by the end of the previous year. It provided systemic and regulatory framework for monetary support to FB MN 1901’s liquidity position at the amount of €44 million. The major goals of this facilitation mechanism were: to relax the market and prevent against the panic; to improve confidence and decrease sudden and strong mistrust of clients; to completely execute the domestic and foreign payment’s orders that have been pilled up in the bank’s documentations for several months.

To summarize, semi-decennial national economic reforms strengthened the neo-liberal standing that financial system’s supervision is not necessary and has no market oriented benefits, provided that economic growth will be achieved through significant growth rates, and resulted in full pacification of the national banking sector supervisor from the end of 2006. Therefore, the CBM’s failure of anticipating the roots of the liquidity crisis within the banking system, which originated in FB MN 1901 operations, it could be found surprising from professional point of view, but it had to be systemically and logically expected. Institutional weaknesses and policy limitations in the implementation of CBM competencies have to be subject of future adjustments and corrections, following that Montenegro’s economic system is not yet viable to endure the collapse of the banking business accomplished reforms, which would help to regain and further improve citizens and clients confidence in the country’s banking sector performance.