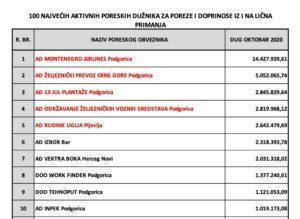 According to the data of Tax Administration, just those five debtors owe a total of 27.7 millions of euros based on unpaid taxes and tax on contributions.

This is also the same amount of the questionable state aid to state owned enterprises during the last year – 28.6 million of euros were given by the Government to the nine state owned companies, without obtaining permission of the Agency for Protection of Competition in the first place.

Among those nine companies which state helped skipping the regulations – there are Montenegro Airlines and Railway Transport, the leaders of this list of debtors. This, generous aid companies return to the state by not paying taxes and tax on contributions.

In the midst of popular discussion in public on splitting the pie – positions in public administration, can the management and administration of these time bombs of the public sector be shared by parties again as pie for suitable ones, only this time by those from different parties?