Citizens should know that the crime does not pay off 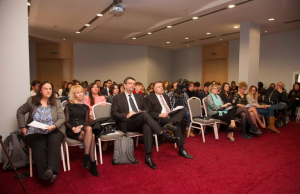 Priorities in the fight against corruption derived from the Strategy South-East Europe 2020 (SEE 2020) in Montenegro and countries of the region are far from achieved, it was assessed at the conference organised today by Institute alternative (IA).

The conference “Against corruption – for Montenegro’s Growth!” was organised with the support of Regional Cooperation Council (RCC) within the project “Governance for Montenegro’s Growth – It Depends On Us!”. The project aims to contribute to the promotion of the Strategy, focusing on its horizontal pillar “Governance for Growth”, emphasising the issues such as fight against corruption, judiciary reform and good governance.

Jovana Marović, Research coordinator at IA has used the example of establishing Agency for the prevention of corruption to explain what are the priorities of SEE 2020 related to the rule of law and capacity building of the institutions whose main task is fight against corruption.

“The citizens were deprived of some important information that have been recommended and condition for the appointment of the director and members of the Council of the Agency,” Marović said, stressing that this institution will not be operational until January 1, 2016, when it is envisaged to start its mandate.

As far as the capacity of these institution, there still have not been any vacancies announced for employees who will deal with new responsibilities, she added. National Action plan for the implementation of the SEE 2020 Strategy in 2014 and 2015 is focused on the reporting on the progress made within the Chapter 23 (Judiciary and Fundamental Rights) and Chapter 24 (Justice, Freedom and Security), establishing the Agency for the prevention of corruption, Law on lobbying and Law on Special Prosecutor’s Office.

Marijana Laković Drašković, Head of Working group for the Chapter 23 in the negotiations with the EU has referred to the establishment of the anti-corruption institutional framework in Montenegro as well as to the results of the Government achieved in this area.

“I would like to conclude my speech with the words of Dirk Lange, who said that year 2014 was the year of legislation, 2015 was year of institutions, and that 2016 should be the year of results”, Laković Drašković said.

Đurđina Nina Ivanović, Deputy Chief State Prosecutor has referred to the results made by the Prosecutor’s Office when it comes to the initiating important criminal proceedings in very short period of time. “The Prosecutor’s Office need support and cooperation with all parts of society. If there is no support, we cannot move forward in establishing the rule of law”, Ivanović said.

Jasna Panjeta, Program and Outreach Officer at Regional Anti-corruption Initiative (RAI), the coordinator of the dimension fight against corruption within the Governance for Growth, stressed the importance of the SEE 2020 Strategy for the exchange of regional experience, which is, according to her, primarily political process lead by the RCC.

She has presented three strategic orientations of RAI, which are essential for the implementation of SEE 2020 Strategy. Those are analysis of the legislation from the perspective of corruption, i.e. mapping the loopholes susceptible to corruption, as well as the exchange of best practices in developing integrity plans within the institutions. Protection of the whistleblowers is also the significant field of activities of RAI, while work on conflict of interest and declaration of assets of public officials is something which, in the opinion of the Ms Panjeta, has the strongest regional perspective.

“It is important to have in mind that the borders do not represent the barriers for the conflict of interest”, she added.

Nataša Bošković, Special prosecutor for corruption and organized crime, has particularly emphasized the adoption of the Law on confiscation of proceeds of criminal activities is as important for the completion of the legislative framework for the fight against corruption. “Confiscation of property is often a greater punishment than the condemnation,” she added. “Crime does not pay off – that is the message that special state prosecutor’s office wants to convey to all citizens.”

Dragana Pešić, from the Association of Prosecutors and Deputy Public Prosecutors of Serbia, emphasized the importance of the professional association as a mechanism to protect prosecutors and to encourage them to resist the pressures at work.

SEE 2020 Strategy also puts emphasis on professional development and training of prosecutors, while the professional associations represent important partners in the implementation of national objectives related to the judicial reform and fight against corruption.

However, she said that the special prosecutors should openly admit that most of the material they are now building cases upon were already there, in the former Department of the Special Prosecutor’s Office.

“No matter how willing they are to fulfill their demanding role, within the current uncompleted institutional framework and without the Special Police unit, they could not have achieved this much,” Bajramspahić added, who started her speech with the key recommendation that, without establishing a fair assessment and progress and objective measurement of the professional performance in the State Prosecution, sustainable results cannot be expected.

Second panel held within the conference was dedicated to the civil society recommendations in determining the priorities in the fight against corruption on the regional level.

Aleksandar Jovanoski, Program coordinator from the European Policy Institute (EPI) from Skopje has pointed out the deep political crisis in his country as well as the institutional and normative framework, which is similar to Montenegrin when it comes to the Special Prosecutor’s Office, but unlike other countries, the Whistleblower Protection Law was adopted.

Ana Novaković, Executive director of the Center for Development of NGOs has referred to the whistleblower’s protection in the region, pointing out the lack of understanding of these issues by the citizens.

“People still equate whistleblowers with spies,” Novaković said, adding that further decisions and policy making in this area should be based on research on how much citizens are interested in reporting corruption.

Boris Marić, Senior legal adviser at the Center for Civic Education, from the perspective of the civil sector pointed out the importance of linking anti-corruption reforms within the Governance for Growth f with Smart growth, the second pillar SEE 2020 Strategy, which involves stimulating growth based on knowledge.

“Every second citizen of Montenegro believe that the corruption is present in higher education,” Marić explained.

Miloš Đinđić, Researcher at the Center for European Policy from Belgrade, has referred to the goals of th SEE 2020 Strategy and Governance for Growth pillar which point out the necessity of the audit and the control of public spending. “Public property management in Serbia is inefficient and the state is managing arbitrarily. Budget users are spending more than it was planned”, he added.

The participants of the event concluded that the cross-sector networking is necessary, i.e. to establish the operational relations between similar strategies and processes on the regional level.

Videos from the first part of conference held today can be seen below:

Panel discussion is organized within the project “Governance for Growth – It Depends On Us!” which is being implemented by Institute alternative with funding by the Regional Cooperation Council under implementation of RCC’s South East Europe 2020 Strategy. The views expressed during the event can in no way be taken to reflect the official opinion of the Regional Cooperation Council.