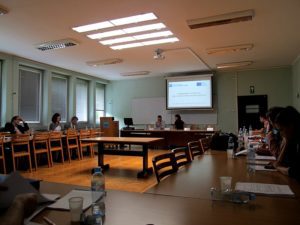 Research coordinator at the Institute Alternative, Jovana Marovic, took part in the symposium “European citizen in times of crisis – the choice between the European Union and its member states as a false dilemma”, which was held at the Faculty of Political Sciences in Belgrade, 26 June 2013. During the conference numerous questions were launched about the citizen’s place in the EU system, the crisis in this supranational community and the impact of the crisis on the citizen and the state of citizen’s static activism and dynamic political elites. Jovana Marovic had presentation on “Active citizenship as a prerequisite for the development of democracy in the European Union.” The conference is part of the “Jean Monnet Module – The constitutional politics of the European Union”, which is funded by the European Commission