A significant burden of the legislative and control function rests on the parliamentary committees and they have mostly failed in this task in the previous period. Additionally, the work of the Parliament has been further hampered by its frequent disrespect by the representatives of the executive power and independent institutions.

These are some of the conclusions that the Institute Alternative shared with the MPs and other participants from the Government, independent institutions, and the NGO sector at the conference, which was held on October 27th, 2022, in Podgorica with the support of the National Endowment for Democracy.

“We are all witnesses that the previous year in Montenegro has been marked by a dynamic political life, which is best reflected in the fact that during this year, in just over six months, two Governments lost confidence”, said Milena Muk from the Institute Alternative. She recalled that the multi-year stagnation and the inability to reach an agreement on key appointments in the judiciary best shows how little the Parliament interferes in its job. She presented the findings from the reports on the work of five committees (Committee on Political System, Judiciary and Administration; Committee on Human Rights and Freedoms; Anti-Corruption Committee; Committee on Economy, Finance and Budget; Security and Defence Committee), and of the overall monitoring of the legislative and control activities of MPs.

Muk pointed out that the active monitoring of the work of the five committees demonstrates that they have not been up to the task in the previous period, recalling that the committees insufficiently use the control mechanisms. Moreover, the committees rarely propose conclusions and recommendations after the hearings and the considered reports. However, in this sense, the Committee on Human Rights and Freedoms is an outlier as it proposed 111 conclusions and recommendations in the period from October 1, 2021, to October 1, 2022.

Milena Muk highlighted that the problems in the work of the Parliament are also caused by its frequent disrespect by the representatives of the executive branch and independent intuitions. She emphasised, amongst other things, the example of the adoption of the Draft Law on the compensation of former beneficiaries of monthly fee based on the birth of three or more children, for which the Government had not submitted an opinion at all. “We also pointed out that the MPs do not sufficiently use the administrative capacities and professional support, available through the Parliament’s Service. This is best illustrated by the fact that the Anti-Corruption Committee became even more passive, despite the recruitment of three independent advisers in the administration of this Committee,” added Milena Muk. She noted that the trend of a more intensive legislative initiative of MPs has continued as they have proposed around 40% of the total number of laws that entered the Parliamentary procedure during the last 12 months. These proposals are mainly accompanied by “thin” explanatory notes.

In the end, she emphasised the priority areas that the committees have not tackled at all. Amongst them stands out the persistent disinterest of the Security and Defence Committee to consider the special semi-annual reports of the Police Administration directors on the fight against organised crime and corruption.

Milosava Paunović, the MP of the Socialist People’s Party and, until recently, the Coordinator of the Working Group for Drafting the Law on the Parliament, reminded the participants that the new Working Group for drafting this important act was formed at the end of July. Previously, the Parliament’s Service had prepared the working version of the Draft Law.

The key dilemmas that emerged during the functioning of the Working Group were the salaries of employees, the participation of women in working bodies, but also the relationship between the current Rules of Procedure of the Parliament and the Law on the Parliament.

Daliborka Pejović, the MP and the President of the Anti-Corruption Committee recalled that the Committee has consistently received negative assessment, which was also the case in the previous convocation. However, she pointed out that, earlier, the representatives of the Agency for the Prevention of Corruption attended the Committee’s sessions more orderly.

“At one point, the Committee was flooded with the initiatives of a group of citizens whose certain rights were violated with the suspected corruption. We shared this information with the Committee’s members, and we asked the Agency for the Prevention of Corruption to help us in getting out of the situation,” she explained. She pointed out that they never received an answer neither to that request nor to the initiative to hold two hearings on certain aspects of the Agency’s work.

Pejović indicated that it is normatively necessary to enhance the obligations of the Agency for the Prevention of Corruption to respond to the invitation and partake in the work of the Anti-Corruption Committee.

Boris Marić, Secretary-General of the Government, said that one of the magical solutions Government for regulating the relationship between the legislative and the executive branches is to pass Laws on the Parliament and the Government. 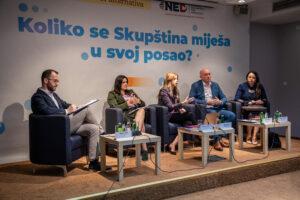 “When passing the two afore-mentioned laws, we will have issues due to certain constitutional arrangements,” noted Marić and added that, amongst other things, the Constitution does not recognise the “government in a technical mandate”.

He emphasised that it is a bad practice that the Government does not submit opinions on legislative proposals initiated by MPs, and that certain sanctions should be prescribed, such as the initiation of interpellation.

During the discussion, Marija Vesković from Human Rights Action asked the panellists whether the provision, which prescribes sanctions for MPs who do not attend parliamentary sessions, should be restored. She recalled that when the vote on the Judicial Council was taken, 65 MPs voted, while there was no information on the whereabouts of the others.

MP Boris Mugoša agreed that penalties are necessary since the comparative practice implies the loss of mandate for MPs who are inactive for a longer period.

He also pointed out that the Government’s opinion on certain legislative proposals of the MPs is waited for even up to three months. After that, the law gets adopted without the requested opinion.

“It is not normal that the MPs propose a greater number of law proposals than the Government as they do not possess the same amount of information,” he added and noted that during the mandate of the 43rd Government, four months passed without the Government proposing a single law to the Parliament.

During the discussion, Milena Muk pointed out that the Government is not obliged to submit the reports of the ministries to the Parliament. She agreed that it is necessary to think about introducing sanctions to improve the relationship between the branches of power, potentially through the Law on the Government, which is currently being publicly discussed.

Boris Marić recalled that the Government’s opinions on draft laws are not binding and that they are given too much importance. “There is a need for a detailed analysis and the exchange of information that will assist the MPs”, he concluded.

Milosava Paunović agreed with the point that MPs do not sufficiently rely on the expertise of the Parliament’s Service, but also pointed out that it is impossible to avoid politics in all aspects. “After thirty years, new people came in with a long wishlist and, consequently, populism emerged. We need to take care that populism does not take over, as was the case during the 42nd Government.”

Daliborka Pejović emphasised that—through the mutual relationship between Laws on the Government and the Parliament—it is necessary to find an appropriate measure to regulate the procedure for drafting laws by MPs.

During the discussion, MP Božena Jelušić highlighted that the Gender Equality Committee, which she chairs, has had 25 sessions, and tried to find the tools for a gender mainstreaming. In that sense, the Parliament’s Service was asked for help and Jelušić expressed satisfaction with its work.

“From this year on, there is also an obligation for gender-responsive budgeting, and we will ask for the help of the State Audit Institution to monitor this,” she noted, criticising the Government members’ practice of non-response to the invitations of the Committee to partake in its work.

You can view the video recording on the following link: