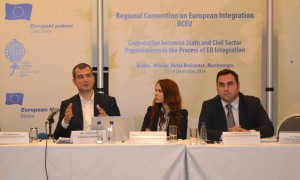 President of the IA’s Managing Board, Stevo Muk, participated in the Regional Convention on European integration organized by the European Movement in Montenegro. The Convention was held in Miločer, from 12-14 December 2014. The focus of the Convention was the relation between Civil Society Organizations and State Actors in the process of European Integration.

Stevo talked about the experiences of Institute Alternative in the process of negotiations through the participating in Working Groups as well in Coalition of NGOs for monitoring the accession negotiations with the EU under Chapter 23 – Judiciary and Fundamental rights. Additionally, his presentation covered the topics on mandate and activities of Council for cooperation of the Montenegro Government and Non Governmental Organisations, as well as the practice of including Civil Society representatives to the working teams which work on the improvement of anti-corruption legislation.

Next to Institute Alternative, speakers at the Convention were the representatives of Civil Society Organization from both the region and European Union countries. For more information about the event, visit the official website of European Movement in Montenegro.