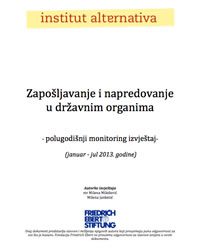 First six months of implementation of the Law on Civil Servants and State Employees had certain positive effects. Internet presentation of the Human Resource Management Authority offers a detailed insight into the reports on testing abilities and evaluation of candidates for job positions in state authorities. Also, filling of vacancies analyzed by the Institute Alternative, from the aspect of the time period between launching the procedures and selection of the candidate, can be assessed as efficient. However, until July 1, 2013, some of the legal and institutional preconditions for the application of the act were not met. Six out of thirteen envisaged by-laws, which were expected to elaborate the implementation of the new law, did not enter into force within the reporting period.

The report focuses on filling the vacancies in state administration. Furthermore, the focus is on those job positions which prescribe the general obligation of the head of the state authority to select the candidates who received the highest ranking during the previously regulated procedures of testing and evaluation. Only seven persons were selected in line with these procedures for job positions in state administration in the period between January 1 and July 1, 2013. In all seven cases, ranking list was composed of one candidate, who was subsequently selected for the certain job position. On average, 58 days was needed for these vacancies to be filled.

Around half of the state administration authorities aligned their acts of systematization and internal organization with the new law by July 1. Only five of them have done so within the prescribed deadline of 60 days after the start of the implementation of the act.

Although there is an increase in submission of information about civil servants and state employees into the Central Human Resources Record, this information system of the Human Resources Management Authority, which is a key to the human resource planning in state administration, is still only partially updated. By July 1, data for 7 out of almost 13 thousand servants and employees, who fall under the scope of the law, were not submitted to the system. Institutional capacities for implementation of the new law and related by-laws are also insufficient. All the envisaged job positions in the Administrative Inspection and in the Human Resources Management Authority were not entirely filled, but only around fifty percent of them.

Delays in responses to the freedom of information requests and failures of authorities to publish the lists of their employees hinder monitoring of the law’s implementation. It is this necessary to ensure consistent implementation of the Law with regard to the recruitment and promotion in state authorities. Also, there is a need for efficient oversight of the application of the new rules, with an aim of preventing the abuses by hiring people via employment mediation agencies, which would make the obligation of testing abilities of candidates for job in state authority pointless.