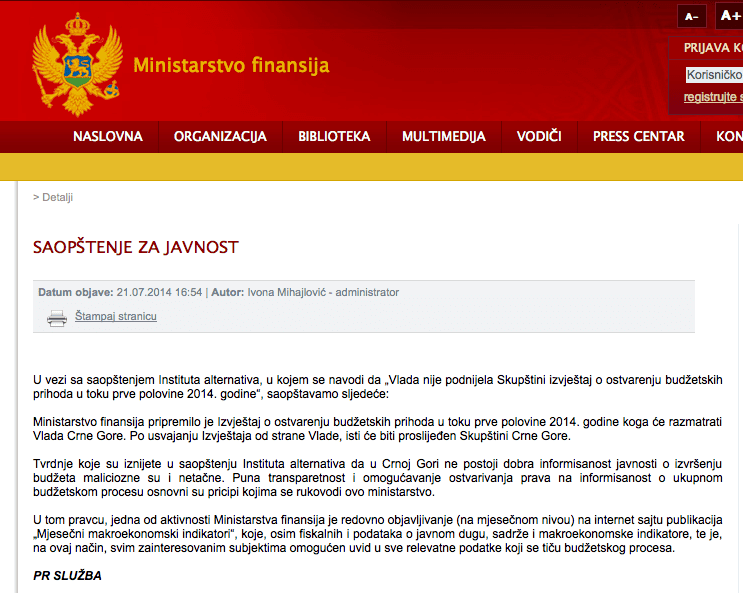 Usage of the aforementioned qualifications by the Ministry is inappropriate and unsubstantiated. In its press release, the Ministry did not contest the facts we had presented. Everything we had written is true and this was confirmed by the Ministry itself: 1) The Conclusion of the Parliament was not complied with; 2) The Government is behind the schedule with submitting the report on the implementation of revenue; 3) The Law on Budget and Fiscal Responsibility does not stipulate the obligation of semi-annual reporting to the Parliament on the budget execution.

Let us remind that in our press release we had pointed out to the fact that reporting to the Parliament on the budget execution is not stipulated within the legal framework. Introducing such obligation was one of the proposals we advocated for during the public hearing on the Draft Law on Budget and Fiscal Responsibility, as well as during parliamentary debate on the Bill on Budget and Fiscal Responsibility. The Ministry of Finance, the Government, and the parliamentary majority did not support our proposal.

In addition to advocating for greater transparency of the budget process, Institute Alternative wishes to present to the public the manner in which the Government behaves towards the conclusions of the Parliament. In this particular case, we have provided evidence that an important Conclusion of the Parliament, adopted accompanying the 2014 Budget Law, was not complied with, even though the deadline has passed.

We will continue to monitor implementation of conclusions of the Parliament, especially those referring to the budget process, seeing that we consider them particularly important. Likewise, we wish to express our hope that the Ministry of Finance will make an effort towards not ignoring or forgetting about the parliamentary initiatives aiming at strengthening the transparency of the budget.

Finally, we express our hope that the communication of the Ministry of Finance with the public and non-governmental organizations will be based on arguments corroborated by facts, and that the response to our press release will be the last example of usage of offensive qualifications in public relations.