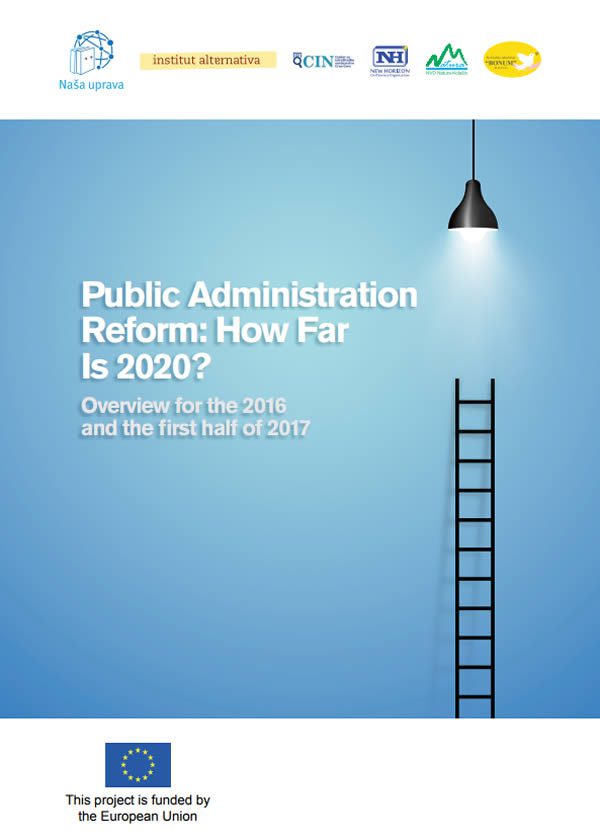 This report aims to present state of play in key areas of public administration reform, with additional general overview of the implementation of the 2016-2020 Public Administration Reform Strategy.

The start of implementation of the Strategy has not yet given expected impetus to public administration reform: during the first 11 months of implementation, 60% of the activities were not implemented within the envisaged deadline. The findings of the report indicate that policy development and coordination and human resource management are particularly problematic areas.

During the rest half of 2017, public debates on important legislative amendments, such as the ones regulating public procurement and free access to information, were completely avoided.

Amendments to the Law on free access to information, although formally one of the activities envisaged by the Strategy, represent a step backwards in the transparency of the work of the administration. They introduce additional restrictions on access to information, such as business and tax secrets, as well as need to prove special interest to access information in some cases.

Local sector recruitment is particularly poorly regulated. This is reflected in bad practices, such as publishing job vacancies for already lled positions and lack of testing of prospective local sector employees.

“Terrain preparation” for the new Law on administrative procedures, whose implementation started on July 1st 2017 with expectations to improve service delivery, has encountered difficulties. Namely, the lack of harmonization of specific laws with the new provisions of this systemic law, has proven to be major impediment. Due to this setback, the transitional provisions of the new Law have already been amended, and the old version of the law will continue to apply to all proceedings that have not been finalized by July. This will negatively affect the average duration of administrative proceedings.

For the progress in public administration reform, it is necessary to delete new restrictions regarding access to information, as well as to enable better reporting of supervisory bodies. The report also offers recommendations for more effective organization of public discussions, service delivery and human resource management, especially in terms of restricting discretionary powers and more objective testing procedure.

This report has been produced with the assistance of the European Union within the project “Civil Society for Good Governance: To Act and Account”, implemented by Institute Alternative, Bonum, Natura, New horizon and Centre for Investigative Journalism. The contents of this report are the sole responsibility of the authors and can in no way be taken to reflect the views of the European Union