The Law on Public Procurement should better regulate the procurement system in the area of security and defense. The National Security Agency (NSA) and the Ministry of Interior Affairs (MIA) spent about eight million euros for confidential procurement since 2013 until last year.

This was assessed at the panel discussion “Confidential Procurement – Out of Sight, Out of Mind”, which is part of the same project, implemented by the Institute Alternative in cooperation with the Center for Investigative Journalism, with the support of the European Union within the project “Accountability, Technology and Institutional Openness Network in the South East Europe region – ACTION SEE”. 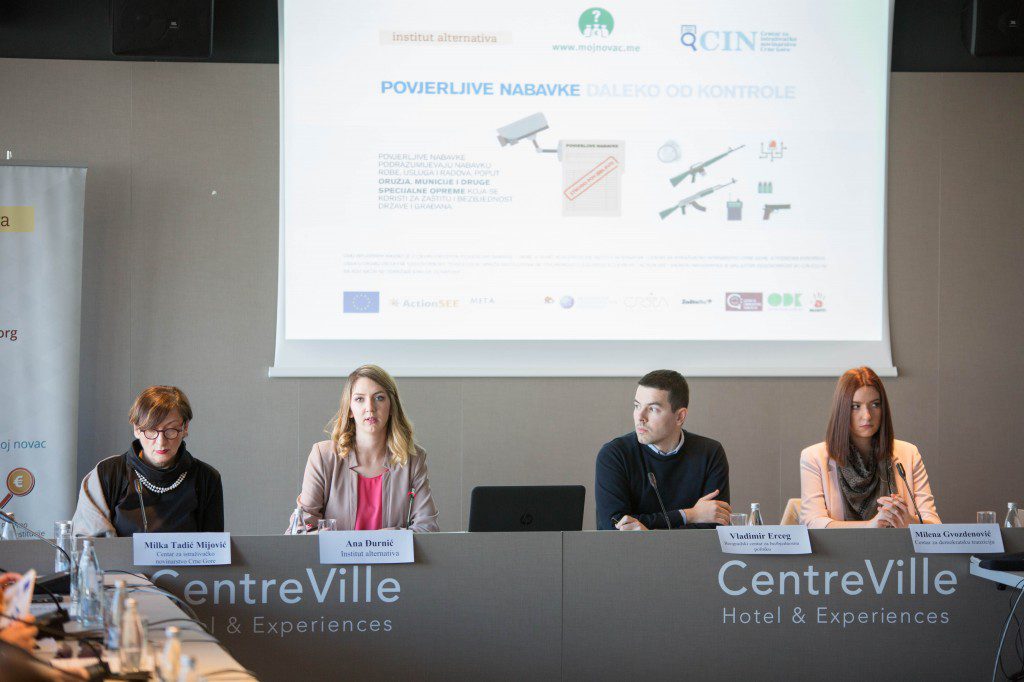 Project Coordinator and Public Policy Researchers at the Institute Alternative, Ana Đurnić, explained that the research the IA conducted focused on the NSA, MIA and the Ministry of Defense, and covered the period from 2013 to 2017.

“Key research findings show that public money spending on confidential procurement in Montenegro is done far from the eyes of the public, and that even basic data on these procurements, such as acts which are used as basis for their implementation, are often not available to the public,” said Đurnić.

She said that in the Montenegrin legal framework, which regulates the procurement system in the field of security and defense, there is a “terminological mess” that negatively affects regulation of this area.

“Montenegrin legislation distinguishes between procurement in the area of security and defense and confidential procurement. Accordingly, procurement in the field of security and defense is subject to the Law on Public Procurement and internal acts of the contracting authorities, while the latter is treated as an exception to the application of the law, without specifying what constitutes confidential procurement and which act regulates it. This creates confusion in practice, as the contracting authorities claim to implement one, but not the other, even though they refer to the same procurement, “Đurnić explains.

Therefore, as she explained, the contracting authorities claim that since May 2015 they have not conducted confidential procurement at all, since the Decree on External Trade of Special Purpose Means ceased to be valid at the time.

“Despite this, expenditure for confidential procurement still exists because, as they say, they are paying off obligations stemming from contracts concluded before May 2015, when these procurements were regulated by the Decree on External Trade of Special Purpose Means” , Đurnić said.

She further notes that when it comes to internal acts of contracting authorities, the Ministry of Defense said that this act is in drafting process, although, as she explained, the deadline for its adoption was four months after June 2017, when amendments to the Law on Public Procurement entered into force.

“We also asked the MIA for this internal act and they sent us an instruction from 2014, which means that the new act in accordance with the new legal solutions has not been adopted,” Đurnić said.

“Contrary to EU regulations, the NSA is exempted from the implementation of the Public Procurement Law when it comes to procurement in the area of security and defense. Instead these are prescribed by their Law on the NSA, and regulated by the act of the Agency Director, which is also classified as confidential and cannot be accessed, “Đurnić explained.

She notes that the NSA spent between 300 and 400 thousand euros on confidential procurement in 2015 and all of the previous years, while in 2016, this expenditure increased to almost two million euros.

“For 2017, we were not provided data under the pretext that this would require compiling of completely new information. We cannot say whether there is a growth trend when it comes to the NSA expenditure or this was only a temporary increase in expenditure, characteristic for 2016, “Đurnić said.

She said that no legal solution, apart from the Decree on External Trade of Special Purpose Means, regulated planning and reporting on procurement in the area of ​​security and defense.

Đurnić pointed out that the international expert organization SIGMA in its last year’s report stated that legal solutions currently in force for the procurement system in the field of security and defense are not good.

“Because of this, this year the level of compliance of our regulations with the legislation of the European Union was assessed with a a score of three by SIGMA,” Đurnić said.

She notes that the only evidence of abuse in the area of ​​defense and security when it comes to procurement are the reports of the State Audit Institution (SAI).

“During this reporting period, the SAI audited all three consumer units we dealt with and found the same irregularity with all three of them, namely procurements that should be public are conducted by confidential procedures,” explained Đurnić.

She stated that the NSA in 2015 spent 50.000 euros confidentiality on the procurement of official vehicles, and the SAI, based on tender specifications, subsequently found that this procurement should had been public because the vehicles were not procured with special operational-technical means, so in that sense they do not represent special equipment.

“Additional problem is that they obtained special approval from the Government to do this,” explained Đurnić.

The NSA and the MIA expenditure for confidential procurement in the five-year period, as she said, amounted to about EUR 8 million.

“We still do not know how much the Ministry of Defence spent since they refuse to provide us data on their spending for confidential procurement for three months already,” said Đurnić.

The Security and Defense area, as she said, is not sufficiently regulated and needs to consider well the Law on Public Procurement which is currently in public discussion.

“Special attention should be paid to regulating this area, otherwise, next year we will again get a warning from SIGMA and the European Commission with regard to the irregularity of this particular area,” says Đurnić.

President of the Center for Investigative Journalism, Milka Tadić Mijović, assessed that procurements are designated confidential even when they are not. 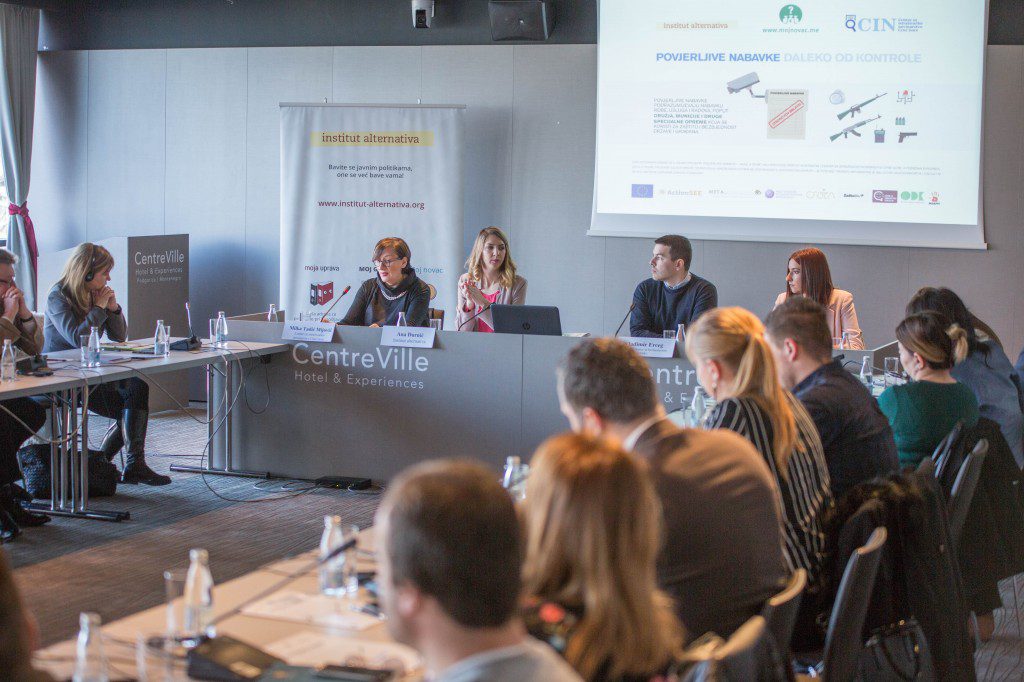 “It is absurd, but as the European integration process which should strengthen the rule of law and structural reforms in our country develops, media freedoms and access to information of public interest are declining,” said Tadić Mijović.

According to all relevant international organizations, as she said, Montenegro is lower on the scale of media freedom today than it was before the opening of negotiations.

“Political circles holding monopoly, who have captured our country, do everything to make media reporting impossible when it comes to issues related to corruption, violation of rights and procedures, especially in the area of procurement where there is vast space for abuse of public interest,” assessed Tadić Mijović.

She assessed that grand corruption hides exactly in the institutions from which we seek information that sometimes refers to transactions worth tens of millions of euros, which, she adds, are often conducted without following prescribed procedures at the expense of the public interest.

“This concealing of data should not discourage us. Media together with NGOs should do their best to illuminate processes and state affairs, even suspicious ones. Hidden data can often be found between the lines even in official documents. We should not stop, we should just seek the truth and do everything to make it public, “said Tadić Mijović.

Belgrade Center for Security Policy Researcher from Serbia, Vladimir Erceg, assessed that when it comes to procurement in the field of security and defense in Serbia there are two key messages.

He said that the Law on Public Procurement in Serbia was adopted in 2013, adding that competitiveness in Serbia in the field of public procurement is decreasing.

“We can be particularly concerned about the area of ​​defense and security. At the EU level, the average number of bids per tender is 5.4, and in Serbia the average is 2.9, while in the MIA in 2016, this average fell to 1.9. There is also an increase in the number of open procedures in which only one bidder participates.”

Representative of the Center for Democratic Transition, Milena Gvozdenović, said that openness is one of the key conditions for democracy because, as she said, it enables citizens to get information and knowledge they need in order to effectively control the government.

“Unfortunately, this topic is little discussed in our region, and concrete steps are taken even less often,” Gvozdenović said.

Below you can find video recordings from the event:

Panel discussion is a part of the project “Confidential Procurement – Out of Sight, Out of Mind”, implemented by the Institute Alternative in cooperation with the Center for Investigative Journalism, with the support of the European Union within the project “Accountability, Technology and Institutional Openness Network in the South East Europe region – ACTION SEE”. 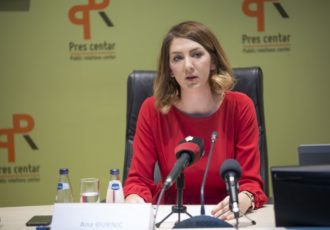