Ministry of Finance has finally published the PIFC Report, waiting for the Parliament, SAI and the public

We welcome the decision of the Ministry of Finance to publish a Consolidated report on the system of public internal financial control (PIFC) for 2014. Reports for the previous years have been classified with the designation RESTRICTED, as opposed to good practices, the recommendations of the European Commission and the decision of the Administrative Court.

The report was adopted yesterday by the Government and published seven years after the adoption of the Law which provides the establishment of the system of internal controls, bringing a handful of interesting data about how they actually work. 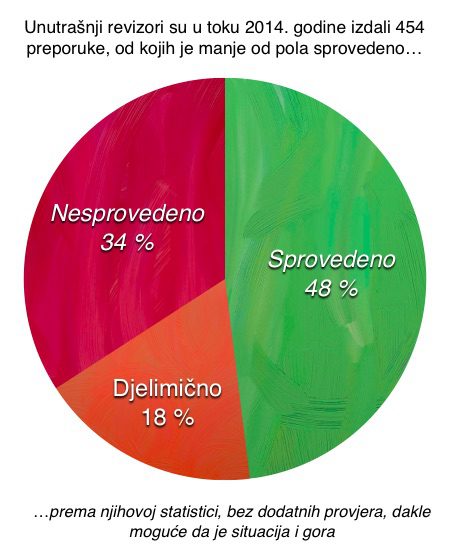 of Finance. Only 69% of the budget users have delivered a Report on the Financial Management and Controls, and those that have provided it, failed to submit complete data in all cases. Due to these problems, we have proposed penal provisions for failure to report during the last Law amendments, but neither proposer of the law nor the MPs have taken our proposal into consideration.

There are problems in the implementation of the conclusions given within the last year report, out of which only one has been implemented completely, and the remaining five only partially. Majority of local self-governments have failed to implement those conclusions.

One of the conclusions of the Report is that all public sector entities should establish a system for reporting and identifying irregularities and abuse, despite the existence of the budget inspection of the Ministry of Finance.

Now that the data on internal audits are public, other actors should put pressure on budget users to meet their legal obligations and to establish a functional system that will prevent abuse and inefficient use of public funds.

We appeal to media to monitor the implementation of Government’s conclusions and keep constant pressure on the budget users. We invite the State Audit Institution to pay attention to the statistics which the internal auditors report on the implementation of recommendations and to check their veracity. We invite the Parliamentary Committee for Economy, Finance and Budget to organize a special session for reviewing this report and to adopt its own conclusions, whose implementation will follow in the forthcoming period. Also, the special attention should be dedicated to the reports of those budgetary spending units which are not a part of the consolidated report as they are reporting directly to the Parliament (such as the Ombudsman, the National Security Agency, the Agency for protection of personal data and the free access to information, etc.).