Skip to content
Institute Alternative » EU accession negotiations » Press release of NGO Coalition: No political will for substantial changes in the Montenegrin society

Although the normative framework on human rights, fighting corruption and the development of civil society had been promoted, sufficiently strengthened and/or effective institutional mechanisms and inadequate implementation of the legislative framework in practice make the situation in these areas partially satisfactory. On the other hand, the situation in the area of judicial reform is still unsatisfactory. A common feature of the current situation in each of these areas is the lack of political will to get to the core of the positive change.

Below you can find the key findings of report made by Coalition of 15 NGOs for Monitoring the Accession Negotiations with the European Union under Chapter 23 – Judiciary and Fundamental Rights, consisted of detailed information on the level of the reforms undertaken in the areas of judicial reform, anti-corruption, human rights and development of civil society organizations from October 10 2012 to April 10 2013.

Constitutional reform is unduly delayed, although it is necessary to eliminate political interference in the appointment of judges and prosecutors. The proposed amendments of the Constitution have not been provided the necessary safeguards against political interference in the appointment of judicial officials, and it will be necessary to provide that by the law reform after the reform of the Constitution. Constitutional position of the State Prosecution is still uncertain – it has not been proposed who to appoint prosecutors-the State Prosecutor, and majority required for the appointment. Also, it has not been guaranteed that half of the Judicial Council members, besides judges, remain politically unengaged or associated in person, which enables a political impact in the future. Although there has been some progress, the work of the Judicial and Prosecutorial Council is still not transparent enough. There is no legal document that specifies the way of evaluating quality of judges’ work, and no system of regular evaluation of their work, which would provide certainty in decision making on career development, or calling for responsibility. Especially concerning are long lasting trials and abolition of verdicts, even twice in cases of special public importance such as war crimes in the nineties (the case Morinj) or organized crime (murder of police inspector Scekic from 2005). 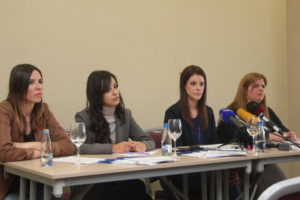 following problems: Agency for protection of personal data and the free access to information has not received adequate support from the Government of Montenegro for implementation of the Law on Free Access to Information, the State Audit Office is still working with its Senate incomplete; systematized the process of filling in the field of internal audit is slow ; absence of final decisions regarding corruption in public procurements; billing system of concessions is not adequate, the system of protection of “whistleblowers” is not satisfactory.

Some of the problems identified in the area of human rights during the period: growth in the number of reported incidents of discrimination and lack of final judgment in discrimination cases; ineffectively investigated and prosecuted cases of attacks on journalists; promotion of impunity of torture and other ill-treatment; unsatisfactory level of implementation of Gender Equality Law and ineffective implementation of the Strategy for Combating Domestic Violence (2011 – 2015); persons with disabilities continue to face limited access to facilities used by the public, health care, access to education at all levels and adequate vocational training and employment; lack of understanding of the need to protect the identity of LGBT people in court, lack of platforms at the national level for the protection of persons engaged in sex work, especially the plight of the Roma and Egyptian populations and internally displaced persons; the unavailability of legal aid to citizens that, due to financial situation, cannot get legal aid in all cases in which decisions are made about their rights and obligations- which are are just some of the problems identified in the area of human rights.

Government has shown willingness to cooperate with civil society at a formal level, however, there is still no fundamental understanding of the need for cooperation and investment in the non-governmental sector.

The Report contains concrete recommendations as necessary preconditions for the opening of negotiations under the Chapter 23. In addition, this document contains recommendations to the European Commission to improve access to reporting on the progress of Montenegro, to contribute to ensuring full transparency in the negotiating process and taking specific measures in judicial reform, fight against corruption and to protect human rights in accordance with its responsibilities.

The Report is signed by 15 member organizations of the Coalition: