The priorities of police reform in the region are better management of human resources and cooperation with other institutions, as well as more efficient fight against corruption, it was stated at the panel discussion of Institute Alternative and POINTPULSE network

A key conclusion of the discussion was that police reform refers to improving its functioning so it could be more citizen-friendly. 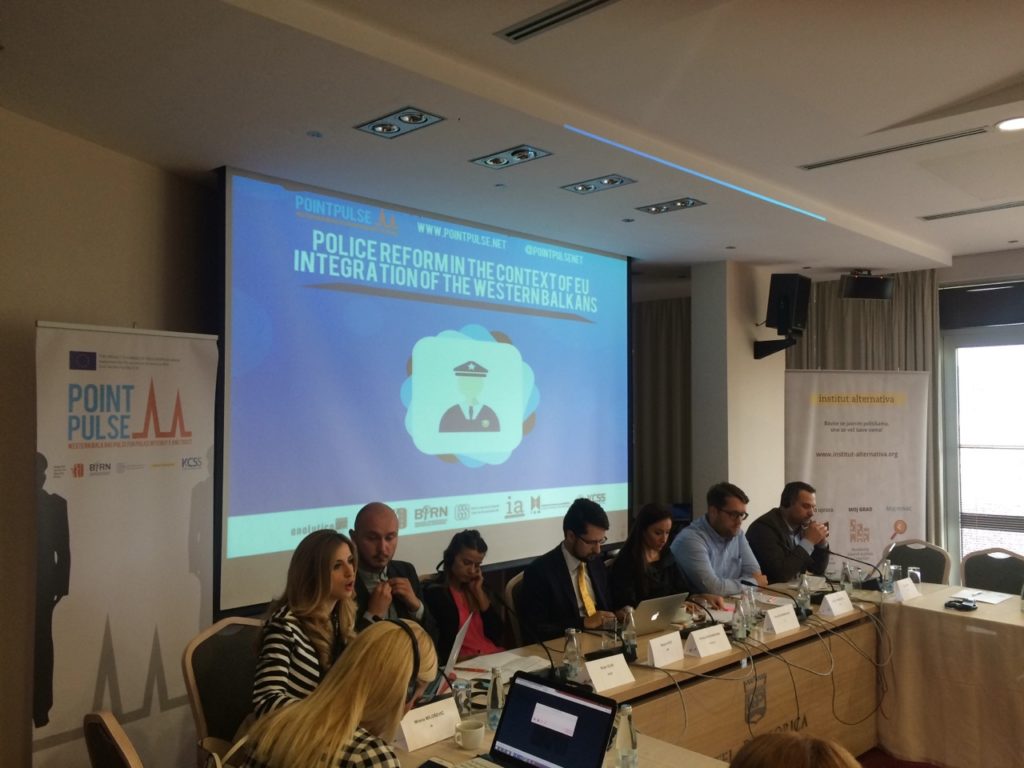 Despite the specifics reflected in uneven progress in negotiations with the European Union, the Western Balkan countries share a number of problems and challenges, where corruption and too much political influence on operational policing stand out.

Dina Bajramspahić, researcher at the Institute Alternative, while presenting the experience of Montenegro, pointed out that our country, after five years of negotiations and opening 24 chapters, is a good example of how the process of EU integration should not be underestimated, nor overestimated.

She added that the external actors find it difficult to follow the negotiations because the key reports remain out of reach to the public.

As she states, the key priorities of the reform of the police should be recruitment and promotion based on merit and not on political influence, as well as the rationalization of the police.

“In Montenegro, we have the paradox of police service being overabundant, and at the same time lacking personnel,” said Bajramspahić, adding that police have long been treated as a social service for the disposal, which left long-term effects on the professional service.

Andreja Bogdanovski, from Analytica, Skopje referred to problems in Macedonia, which are partly consequence of delays in the negotiations with the EU.

He stressed that the high expectations of the EU integration process is a myth that should be defeated.

“The European integration process is not comprehensive because some gray areas remain outside“, added Bogdanovski, referring to secret surveillance measures as an example.

Bojan Elek, from Belgrade Center for Security Policy, commented on the police reform in Serbia, which lasts for fifteen years: “The entire process of reform can be described as a handful of great announcements and ideas, which while being implemented turns into something opposite“. Elek had particularly emphasized the incident in Belgrade Savamala area, when the police did not intervene in the case of demolition, which showed that there is no independence of the police and the political impact on operational policing is great.

Sanjin Hamidičević, from the Centre for Security Studies, based in Sarajevo, stressed that the police reform in Bosnia and Herzegovina has been initiated mostly from outside, in the post-war period.

This country’ specificity is the complex structure of the administration, and therefore the police agency, which has a negative impact on attempts to reform in this area.

Besjana Kuči, from the Institute for Democracy and Mediation from Tirana, stressed the need for a more proactive approach to enforcing police integrity.

She believes that police reform cannot be implemented in isolation from other reforms, and as one of the good results of police reform in the Western Balkans she highlighted the strengthening of regional cooperation.

“A good example is the joint border crossing between Montenegro and Albania,” she added.

Plator Avdiu from the Kosovo Centre for Security Studies, based in Priština, stated that one of the key challenges of police reform is human resource management, particularly in the context of the recent budget cutbacks for these purposes.

He also pointed to the unfavorable age structure of the Kosovo Police, for which the Government has adopted a program of early retirement for a large number of officers.

Avdiu stressed the adverse social policy in respect of the police officers in Kosovo, which are not adequately insured.

During the discussion it was pointed out that most of mentioned problems and challenges is identified by strategic documents of the Montenegrin government, primarily by the Police Development Strategy for the period 2016-2020.

Aleksandar Saša Zeković, president of the Council for Civil Control of the Police, noted that despite the different progress in EU integration, all countries in the region share the same problems when it comes to the actions of the police in a crisis, which is confirmed by the incidents that followed the opposition protests in October 2015.

He stressed the need for strengthening the external and internal control of police work.

Michal Kopcik, Counsellor at the Embassy of the Slovak Republic, said that the social protection of police officers is one of the key elements of the police reform, which is unjustifiably absent from the discussion.

However, he believes that a strict framework of punishment should accompany the improvement of social policy towards police officers.

Radovan Ljumović, Head of Department for Analytics, improving the work and development of the police, agrees with the message of panel discussion – that police reform must be complementary with other reforms in society, as the lack of accountability is the shortcoming of the overall system.

The study, with a comprehensive assessment of the police integrity in Montenegro, as well as in other countries covered by POINTPULSE project, will be presented later this year.

At the link below you can see a video clip of Television Vijesti from today’s event:

Here you can check out the Radio television of Montenegro report on our event: 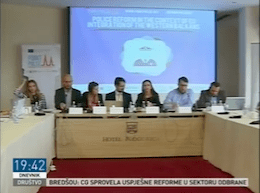