Concession policy in Montenegro is not controlled, non-transparent, and brings multimillion damage to the both national and local budgets, but Government does not do anything to improve such situation in the area for years, since it does not publish neither data on contract nor the data on the concessionaires’ debt, and furthermore, does not improve the legal regulations.

The State Audit Institution (SAI) has given the negative opinion on the compliance of the register of the contracts on the concession with the provisions of the Law on concessions, pointing out that the register is neither available, nor complete, nor available in the electronic format. Moreover, SAI points out to the frequent failure to submit the data, contracts on awarded concessions, and changes of the basic contracts, by the Ministries, national and local bodies, which should be defined as a violation of the Law on concessions.

This additionally contributes to the non-transparency, since the Government does not inform the public about the situation in this area for years. Since January 2013, the report on the implementation of the concession policy has not been prepared, while the Commission for Concession still has not published the report for the last year. Although the legal mandate of the Commission has expired in September, the Government has appointed new Commission not before April this year. Since the termination of the mandate of the previous Commission, it was not possible to get the details about the concession contracts, since the website of this body still does not work.

Beside the fact that the register on concessions is not being regularly updated, the current amount of information included is exceptionally limited. This problem was repeatedly pointed out by Institute alternative in its reports, emphasizing the need to publish the plans of the repayment of the concessions and other details of the basic contract.

The draft law on public-private partnership (PPP), which was at the agenda for the public hearing in March and April this year, does not improve this issue, since it does not extend the scope of information which should be published, nor it prescribes the obligation of submitting the information on quarterly basis about the state of collection of concession fees and implemented oversight by a public authority. In relation to this, it is necessary that the law stipulates that the register of contracts on PPP and concessions contains the information about collected resources, delays, as well as the plans of the financial repays, which is extremely important when it comes to allocation for the local self-governments. 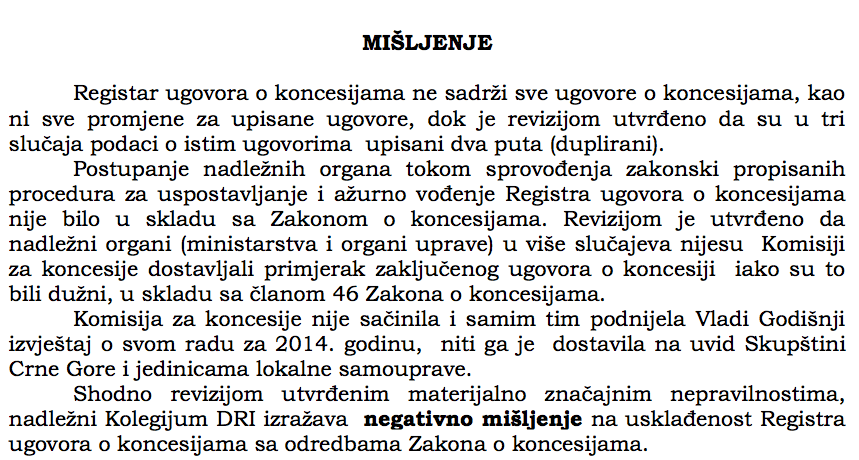