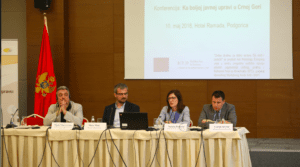 There will be no substantial progress towards better public administration in Montenegro until there is accountability for violations of laws, failure to act and administrative silence, as assessed by the Institute Alternative (IA).

At the conference “Better Public Administration in Montenegro”, organized by the IA, Milena Milošević, Public Policy Researcher in the organisation, pointed out that accessibility of public services is a problem that everyone should be worried about and which needs to be tackled.

“In April this year, when 24 institutions were visited, two-thirds of them had no access ramp for disabled persons at the entrance. And even in the one third that provided some access for these persons, there was no accessibility inside the institutions. I find this to be one of the most neglected issues of public administration reform, ” Milošević said.

She further noted that key issues and challenges are present in the area of access to information.

“Institute Alternative was denied access to information about public debt management, as well as information on fulfilment of tax obligations of 16 local self-governments in Montenegro. Our stance is that tax secret and business secret should not apply to public institutions’ affairs, “Milošević said.

According to her, there will be no substantial progress until there is accountability for “drastic” violations of laws, failure to act and administrative silence. 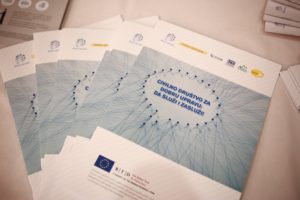 Public opinion survey showed that about 50 percent of Montenegrin citizens have high or moderate trust in public administration.

“It is not growing. There is definitely no positive impact of the application of new solutions on citizens’ trust in public administration. Some partial progress has been achieved with the new Law on Civil Servants and State Employees and the new Law on Local Self-Government, “Milošević said.

She pointed out that implementation of optimization process is still pending which, as she explained, means adjusting the number of public administration employees to its actual needs.

She considers that the Government of Montenegro often does not implement the laws it proposes, as well as the conclusions it adopts.

Marija Hajduković, the Head of the Department for Management of PAR Process in the Ministry of Public Administration, assessed that some performance indicators showed a negative trend and that this was the case with free access to information.

Hajduković believes that shift in consciousness is very important and that, in the coming period, the bureaucratic system needs to reach the key goal “which is to be a service-oriented public administration”.

She pointed out that many activities were carried out in the previous year and that conditions have been created for having institutional and political coordination of the reform process. 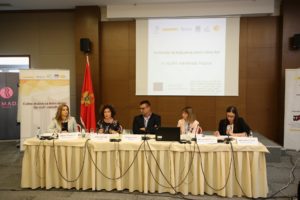 “Independent monitoring is a powerful tool in the hands of civil sector because it provides citizens with a broader image of the results achieved in the reform, limitations and non-implemented plans, and in this way it gives the citizens an insight into the results achieved by the Ministry of Public Administration and other institutions that are responsible for the process of this reform, “Hajduković said.

She believes that administrative silence is a more negative occurrence than rejection of requests.

“Because the request is rejected based on certain legal grounds, where one can, through legal protection, assess the legality of rejecting such a request,” said Hajduković.

UNDP Program Manager, Jelena Mrdak, said that when it comes to local self-government, most has been done in the context of legislative framework, noting that the Law on Local Self-Government and the Law on Civil Servants and State Employees were adopted.

“The new Law on Financing Local Self-Governments is being drafted. The Strategy foresees an indicator of reducing the number of employees by five percent at the local level by the end of this year, and by ten percent by 2020. This is a very significant challenge, given that 54 percent of local-level employees work in public companies. This figure, which is about 1.217 employees, will be very difficult to reach, “Mrdak explained.

According to her, a very important activity is introduction of single information system for administration of local public revenues.

“This is an important activity from several aspects, but above all because of better collection of real estate tax. So, through this information system, we will enable local governments to improve their tax collection, “Mrdak said.

She considers it important to strengthen the internal audit system at the local level.

Program Manager at the Regional School of Public Administration (ReSPA), Dragan Đurić, assessed that relation to the concept of public administration reform is radically different today from what it used to be.

Providing quality public services is, as he said, one of the central tasks of public administration.

“Good administrations are cohesive, they provide overall cohesion in society. When we look at Montenegro, we see that we are not a very cohesive society. This is an additional task for the administration to make sure that all citizens feel equal and that everything is available to them in a similar way, “Đurić said.

He stressed that public administration should respond to new needs, recognize them and respond to them.

Representative of the Association of Youth with Disabilities of Montenegro (AYDM), Miroslav Mima Ivanović, assessed that the public administration in Montenegro is “far from citizens’ service, citizens with disabilities”.

“Citizens with disabilities are not even their service, but the impression is that persons with disabilities are a collateral damage and need to be closed in some institutions, within four walls of their home or, if they need to establish contact with public administration, they should not do it personally, someone should do it for them instead, “Ivanović said.

She thinks that the protection of the rights and interests of persons with disabilities before the public administration does not only imply provision of physical access to the facilities of public institutions but, also the manner of establishing communication and delivering information in an accessible format.

Deputy Protector of Human Rights and Freedoms, Petar Ivezić, said that there is still a problem of failing to act on citizens’ requests or disrespecting legal deadlines for decision-making, that is, administrative silence.

President of Defence and Army Union of Montenegro, Nenad Čobeljić, pointed out that mistakes of civil servants and employees should be graded.

“These mistakes can stem from neglect, but also ultimate ignorance and intent. Civil servants, who make intentional mistakes, must be held accountable. Special measures must be taken against them, in a sense of moving them to other positions, where their irresponsible work will impose less damage to the Ministry and other bodies, as well as to the citizens, “said Čobeljić.

Below you can find video clips from the conference.

The conference is a final event of the project “Civil Society for Good Governance: To Act and Account!”, Implemented by the Institute Alternative, Bonum, Nature, New horizon and Center for Research Journalism, and funded by the European Union within the Civil Society Facility , and the Balkan Trust for Democracy, a project of the German Marshall Fund of the US (GMF). The contents of the blog are the sole responsibility of the author and can not be taken to reflect the views of the donors.