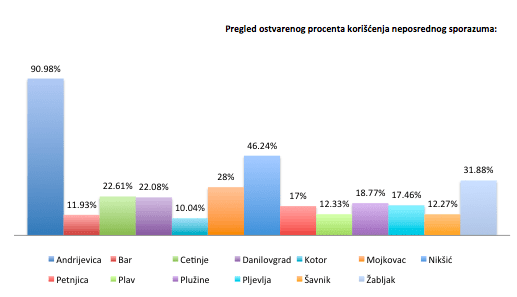 Irrational planning and frequent changes of plans, violations of provisions of the law, contracting goods and services without public insight, remain central problems of procurement at the local level.

In 2014, Montenegrin local governments have spent more than 10 million euro on public procurement. This amount doesn’t include data for Municipality of Bijelo Polje, considering the fact that this local government has not responded to the Institute alternative’s request for free access to information, sent three mounts ago.

Full information about public procurement at the local level can be found here. (in Montenegrin only)

The research is conducted within the project “Civil Society and Citizens against Corruption in Public Procurement”, which is implemented by the Institute Alternative with the support of the Embassy of the Kingdom of Netherlands. The activities aim at strengthening the cooperation between state and non-state actors in the joint efforts in identifying irregularities in public procurement and formulating the recommendations for improvement.