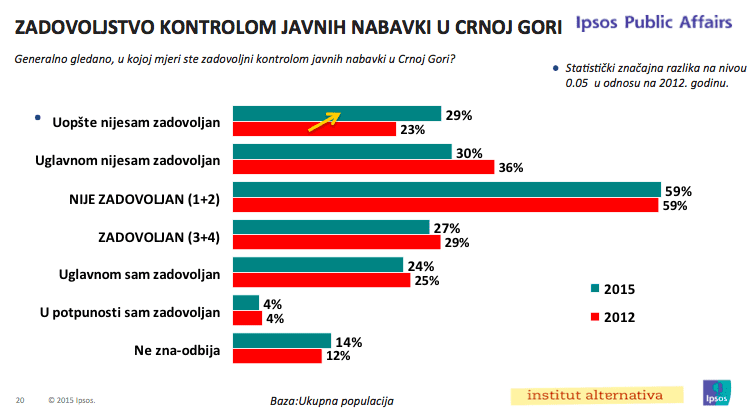 Compared to 2012, when Ipsos Strategic Marketing has conducted the same research for the Institute Alternative, now have been registered considerably more citizens who point out that public procurement serve to enrich individuals and legalize corruption. At the same time, compared to the previous period, a higher percentage of citizens believe that the Government of Montenegro is obligated to act in accordance with the Law on Public Procurement, while the percentage of those who find the state authorities and institutions accountable in this process decreases.

More than a half of citizens are dissatisfied with the control of public procurement in Montenegro (59%) and the percentage of citizens who said that they are not satisfied at all is significantly higher compared to 2012. A higher level of dissatisfaction with public procurement have expressed citizens aged between 45 and 50 years old and Serbian nationality, while a higher degree of satisfaction expressed citizens aged between 18 and 29 years and the Montenegrin and Albanian nationality.

Over two-thirds of Montenegrin citizens emphasizes that it is necessary to involve NGOs in work of the competent authorities for control of public procurement, and the percentage of those who believe that NGO representatives should become full-fledged members of these institutions has increased compared to 2012, as among members of the general population and among citizens who are employed in the public sector.

Most citizens of Montenegro stated that the media do not pay enough attention to the importance of combating fraud and abuse of public procurement, and the percentage of those who hold the same position has significantly increased compared to the previous period.

Presentation of the results of the public opinion survey can be downloaded here.

Public opinion survey on perception of citizens on public procurement was conducted in the period from July 8 – 17, 2015 within the project Civil Society and Citizens against Corruption in Public procurement, which is implemented by the Institute alternative with the support of the Embassy of the Kingdom of Netherlands. The project activities are aimed at strengthening cooperation between state and non-state actors in recognising irregularities in public procurement procedures and formulation of recommendations for improvement.