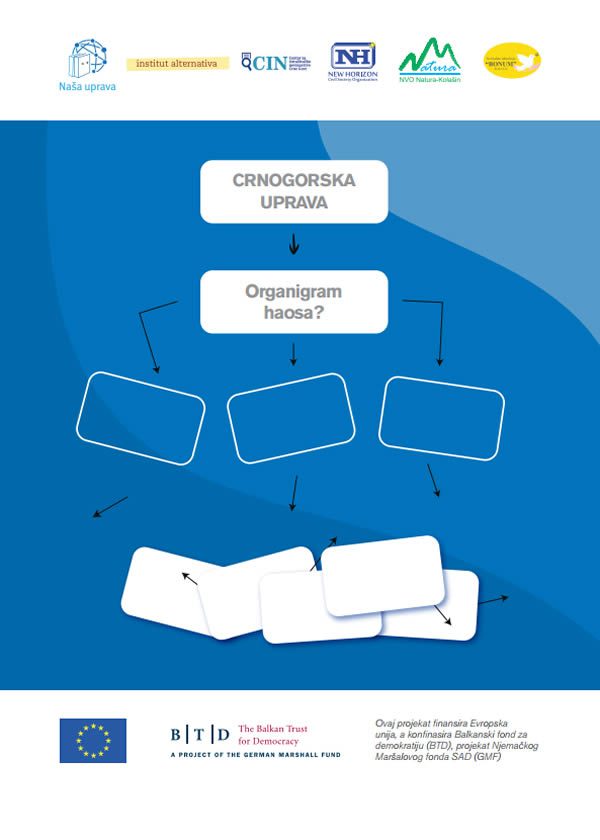 This study deals with frequent reorganisations of Montenegrin public administration in relation to the country’s stated objective: establishment of a more efficient, rational, and flexible administration. The main findings reveal that the decision-makers have too much space for arbitrary and discretionary decisions in adopting new and amending existing acts on the internal organization of public administration bodies, and that these decisions do not follow workforce plans.

In the four years since the coming into force of the Law on Civil Servants and State Employees, the Government adopted two workforce plans, both of them in the middle of the calendar year (in 2015 and 2016). That the plans were not adopted at the start of the budget year substantially detracts from their effectiveness. The plan for 2017 was never adopted. At the same time, the Decree on organization and functioning of public administration in Montenegro was amended 14 times in the period between January 2012 and March 2017, which suggests that re-organization is not an exception, but the rule in the Montenegrin public administration.

Instead of serving as a mechanism for strategic adaptation of the administration to new tasks and roles, frequent reorganizations act, among other, as a potential tool for politicization of the administration and as a way of undermining the autonomy of civil servants and employees. In 2017, in the first ten months of the year, the Constitutional Court received at least two pleas to evaluate constitutionality of organizational changes in public administration. The Complaints Commission, the second instance body in charge of protecting the rights of state employees, endorsed more than 70% of complaints against personnel changes caused by reorganizations of public bodies.

In order to reduce the scope for arbitrary reorganizations and legal insecurity of public employees, there should be a clear link between workforce planning and public administration reorganizations. In other words, workforce plans ought to include analyses of job requirements for positons to be opened in the upcoming period, as well as for those that are to be eliminated. It is also necessary to make compliance with these plans binding. The few positive examples of reorganization plans in some public administration bodies should be taken into account when defining the terms of workforce planning in the new Law on Civil Servants and State Employees, as well as in the accompanying bylaws.

The brief in Albanian language is available here.