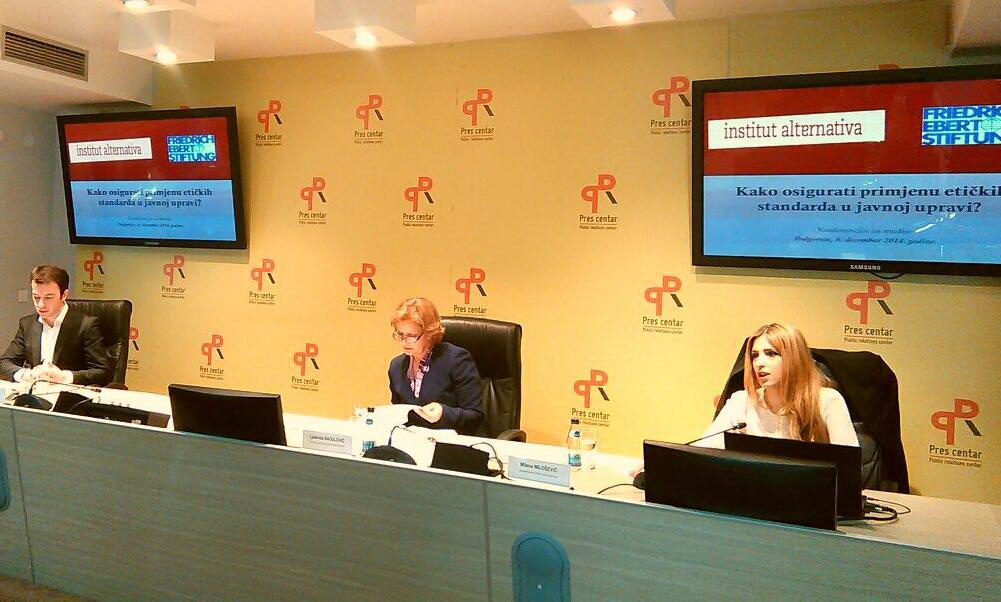 “Montenegro still lacks the basic prerequisites for the successful application of ethical standards in public administration”, was stated at today’s press conference organized by the Institute Alternative.

Next to representatives of Institute Alternative, Assistant Secretary General of Union of Municipality of Montenegro, Ljubinka Radulović has delivered her speech on key aspects of implementing ethical standards in Montenegrin municipalities.

In regard to the national level, the implementation of Ethical code hasn’t responded to requirements expected from the Code – to establish a system of accountability and sanctions for violations of Rules of conduct.

“However, the results of the work of the Ethical Committee by now are very modest.”, said Milena Milošević, researcher at Institute Alternative.

In his previous work, the Ethical Committee has received only one complaint relating to the conduct of a civil servant and one initiative to issue its opinion on the application of the Code. Although the designated contact persons should inform this body of all complaints in relation to violations of the code submitted directly to the senior officers, reporting about the existence of these complaints has not been done, which means that the complaints did not exist at all.

“The modest results of the Ethical Committee are the result of its imprecisely defined competencies and details of activities of this body,” said Milošević.

From its founding until today, this committee has not fulfilled the obligation to meet once a month. In the period from April 2nd 2013 to October 24th 2014, the Committee held a total of 11 sessions. Four more sessions have been convened, which are not held due to lack of quorum, consisting of a majority of all members.

“The Ethical Committee is facing the problem of lack of essential prerequisites for the elementary functions, e.g. non-payment of reimbursements to its members, “said Milošević, noting that two members of the committee haven’t been paid for their work in this body, for at least half a year since its foundation.

It was pointed out that Montenegro has yet to adopt a Code of Ethics of elected representatives.

Assistant Secretary General of the Union of Municipalities of Montenegro, Ljubinka Radulović, has emphasized the fact that Ethical Codes of elected representatives and officials of the local governments, whose adoption was recommended by the Union, are contributing to strengthening the relations and confidence between citizens and authorities.

While working on the models of these Codes and Ethical Codes of local servants and state employees, as well as guidelines for their application, Union of Municipalities has had significant support of international community, including Council of Europe and OSCE.

Models of ethical committees were made at the local level with special limits prescribed in respect of individuals who may be members of these bodies.

It also stipulates that the members of the ethics committee are elected on the basis of public calls. That is not the case at the national level, where the senior officers of several bodies have the discretion to appoint representatives for membership in the Ethical committee.

With the aim of strengthening the moral condemnation of violations of codes of ethics, Ethic committees at the local level have the option to give public opinion about the violation of ethical standards of conduct.

Ljubinka Radulović also emphasized that the body responsible for the application of ethical standards shouldn’t wait for a complaint in order to react, but to be proactive in their work. In this context, a positive example of the ethical committee of the municipality of Nikšić, whose members take appropriate initiatives and organized meetings to promote Ethical codes.

Although the Ethical Committee, body which monitors the implementation of the Ethical Code of civil servants and state employees was also invited to appoint a representative to participate in today’s event, the members of this body haven’t responded to the invitation.

This project has been supported by the Friedrich Ebert Stiftung.