We call upon the Ministry of Finance to organise a public discussion on the Draft Law on Public Procurement in order to enable all the relevant stakeholders to take part in the preparation of this document which will regulate multi-million budgetary spending.

Instead of public discussion, on 10 June 2019 the Ministry of Finance announced public consultations on the Proposal of the Law on Public Procurement, stating in the Call that “it was innovated compared to the version publicly discussed in the period February – March 2018’’.

More than a year has passed since the previous public discussion. Also, the Draft Law has been amended several times and sent twice to the European Commission for opinion – in September 2018 and March 2019. Therefore, it is obvious that this act has undergone significant changes on which the public must be informed through organising public discussion, not the public consultations. 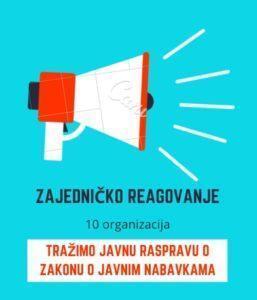 According to the Decree on the Election of NGO Representatives in the Working Bodies of the State Administration and Organising Public Discussion within the Preparation of Laws and Strategies, consulting the interested public involves giving initiatives, proposals, suggestions and comments in the initial phase of draft law or strategy, within no less than 15 days from the date of publication of the public call for consultations. However, within the Call for public consultations, the Ministry of Finance envisaged a seven-day deadline for submitting comments and suggestions to a comprehensive document that is not at all ‘’in its initial phase’’.

On the other side, according to the same Decree, the Ministry would have to organise a public discussion that would last minimum 20 and maximum 40 days. It is important to note that this is a document which contains over 200 articles, and in order to analyse it properly, seriously and professionally – seven days is not enough.

This confirmed the opinion of the European Commission (EC) expressed in the latest Report on Montenegro that although “CSOs participate in various working groups, including on the accession negotiation chapters, often they are not given sufficient information or notice to be able to contribute meaningfully to the process, or their contributions are ignored”.

It is important to note that at the very beginning of the EC’s Report it was emphasized that, looking ahead, Montenegro should focus in particular on competition policy, environment and climate change, as well as public procurement.

Therefore, we call upon the Ministry of Finance to organise a public discussion on this significant Law regulating the annual public spending of over half a billion EUR for public procurement, and to enable the participation of all interested parties in the preparation of this act.