The relationship between parliament and other branches of government, participation of civil society and the role of the opposition in parliamentary oversight, as well as gender mainstreaming are some of the issues that could be included in the work on the announced Law on Parliament. 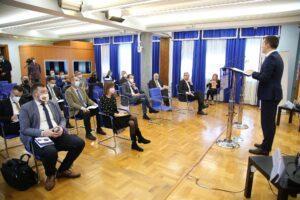 These are some of the conclusions from a conference ‘’Towards Better Parliamentary Oversight: What Law on Parliament Can Do’’, organised by Institute Alternative in cooperation with the Parliament of Montenegro and with the support of the National Endowment for Democracy (NED).

Aleksa Bečić, the President of the Parliament of Montenegro reminded that the issue of passing a special law on the parliament has been pending for years.

“Systematic regulation and normative shaping of parliamentarism, as well as clear definition of the relationship between legislative and other branches of power, is something that all well-meaning factors of political and overall social life strive for’’, he said.

“Showing strong belief that the priority of this convocation will be to strengthen the control and oversight role of the Parliament, I expect from all MPs to contribute in shaping normative assumptions and their later implementation with an aim of strengthening oversight of the executive. After all, there is a room for further improvement and regulation of control mechanisms. The first field where we can solve this is Law on the Parliament’’,  Bečić added.

Stevo Muk, president of the Managing Board of Institute Alternative, pointed out some recommendations, arising from our many years of work, which could be considered during the preparation of the law.

He emphasised the need for the Law to more precisely define and delineate competencies between branches of power and to provide normative framework of the political system and  legal security.

“Also, it is possible to improve obligations to report on conclusions of the Parliament, but also to regulate the reporting on meeting obligations within the accession negotiations with the European Union. For better parliamentary oversight, sanctions should be prescribed for head of state bodies who do not submit information to the Parliament of Montenegro within the set deadlines. These are just some of the recommendations that emerged from our many years of monitoring the work of parliament’’, Muk said. He emphasised that IA will continue work in this area, among other things, within the project ‘’Parliamentary oversight for better governance’’, with the support of the National Endowment for Democracy (NED).

Tanja Dramac Jiries, coordinator of the Western Balkan programme at NED, said that the Parliament should be more than a simple instrument for legalising government decisions, and that it must use its role in controlling the Government, primarily in the name of citizens who choose MPs to represent them.

“European Commission often highlights the need for strengthen control function of the Parliament in all reports on progress of countries who aspire to be EU members. One of the objectives of this project is to contribute to creating new organisational culture of the Parliament’’, she said.

After the introductory discussion, Tara Tepavac from Belgrade-based CRTA (Centre for research, transparency and responsibility), and Uršula Zore Tavčar, general secretary of the National Assembly of the Republic of Slovenia shared experiences of Serbia and Slovenia in regulation of parliament’s work.

Tepavac reminded that Serbia has the Law on Parliament since 2010. She added that this law, among other things, standardised a previously established practice of public hearings.

She pointed out that financial autonomy of the Parliament can be regulated only with special law. Moreover, she added that the practice has shown that some things that are defined by the Rules of Procedure should be regulated by the Law.

“Although the Law regulated the work of the committees, the focus from plenary work did not transfer to the committees and it failed to give them a bigger role’’, added Tepavac.

Zore Tavčar said that Slovenia adopted the Law on the Parliament in late 2019 with the goal of improving financial, administrative and security autonomy of this branch of power: “However, key aspects of parliamentary oversight are regulated by the Rules of Procedure and control mechanisms are often used. There are currently six parliamentary inquiry commissions active in our country, two of which focus on coronavirus control measures and spending”.

She further explained that one session of the parliament in the spring is reserved for discussion of the Ombudsman’s report. “This report is sent to the Government who later submits an opinion. Ministries, whose work falls under the report’s scope, must attend the discussion of the Ombudsman’s report in plenary. They are expected to submit additional information and solutions to the issues highlighted by the report’’, Zore Tavčar explained.

Aleksandar Damjanović, former MP in the Parliament of Montenegro and president of the Committee for economy, finance and budget, considers that there should be a synergy between parallel preparation of the amendments to the Parliament’s Rules of Procedure and the Law on Parliament: ‘’Constitutional framework which defines constitutional competencies of the Parliament is such that  Rules of Procedure, no matter how elaborate they are, cannot cover everything. It is necessary that the constitutional competencies of parliament are further elaborated by law, because that is the case with other institutions such as Ombudsman, the President, the Central Bank, the State Audit Institution’’.

He reminded that the institute of parliamentary inquiry was also used in Montenegro, but that, when the inquiry committee adopted the report on the privatisation of the Tobacco Factory, in the meantime the parliamentary majority did not want to comment on that report at the plenary session. 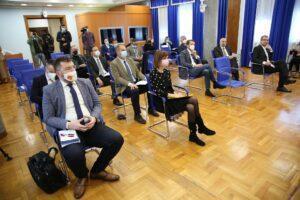 “These are deficiencies in regard to something that is not defined by the Law’’, Damjanović reminded.

Ana Novaković Đurović, executive director of the Centre for the Development of Non-Governmental Organisations, explained that the procedure for preparing the laws was insufficiently defined after the proposals were determined by the Government. Although the Rules of Procedure of the Parliament allow for the public participation, procedures are not sufficiently standardised and the practice of consulting the public is uneven. It largely depends on personal relations of members of the respective parliamentary committees and non-governmental organisations. NGO representatives most often participate in the work of the Committee for Human Rights and Freedoms.

She considers that participation of non-governmental organisations could be regulated in a similar way as it was done at the level of the Government. For that reason, CRNVO proposed amendments to the Rules of Procedure. She considers that some basic issues should also be better regulated , including the proactive publishing of the minutes from the sessions of parliamentary committees, since they are often not published.

Momo Koprivica, an MP and the chief of working group for drafting amendments to the Rules of Procedure of the Parliament of Montenegro, said that there is a need to find the right normative solution for better regulations of relations between the Government and the Parliament. The ongoing work on the amendments to the Rules of Procedure focuses on key burning issues in terms of parliamentary hearings and legislative procedure: ‘’The agreement was to subsequently form a working group, which will deal with more ambitious objectives and tasks, working in parallel on the new Rules of Procedure and the Law on Parliament’’.

Koprivica highlighted that the problem is that the Rules of Procedure cannot introduce an efficient and effective sanction mechanism if the authorities do not submit the requested information. This can be regulated by the law. ‘’Article 50 of the Rules of Procedure prescribes the obligation of MPs to request explanations and information from a wider circle of officials and administrative bodies.’’

Marta Šćepanović, MP, pointed out that the subject of the law should be rights and duties of MPs along with the oversight role of the parliament and transparency of its work: “I agree that the issue of relations with other branches of power should be better regulated”.

She considers that the status of parliament’s officials should be regulated with a special law, because they are exempted from all existing laws.

Participants stressed the need to improve the status of MPs, especially in terms of professional support for their work, without which parliamentary oversight cannot be sufficiently effective, but also in terms of immunity. The Center for Women’s Rights also pointed out the need to prescribe more equal representation of women in the structures within the Parliament, and to improve the role of the parliament in gender-mainstreaming of public policies, especially the laws it enacts.

During the discussion, it was suggested that the parliament should take over the role of authentic interpretation of the law. The recommendations also centred around the role of the opposition, with the possibility to prescribe that opposition representatives chair specific working bodies, such as committees for security and defence or economy, finance and budget. It is also important to ensure that opposition proposals when defining the parliament’s agenda are taken up.

This conference was organised within the project “Parliamentary Oversight for Better Management” with financial support of the National Endowment for Democracy (NED).