1. Do you consider symptomatic that so far several actions initiated by Katnic (Mandic, Radunovic, Medojevic), were simply stopped by the Higher State Prosecutor Ivica Stankovic?

It cannot be said that they were stopped because only one of the series of actions foreseen in the criminal proceedings was halted. All other investigative measures and actions, if there is a need for them, are available to prosecutors. 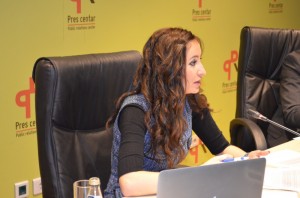 Of course, the very act of the HSP, by which he “corrected” the Chief Special Prosecutor and suggested that he should “not be proposing detention” against the public officials Mandic, Radunovic and Medojevic, is very indicative and shakes already unstable prosecutorial organization. Formally, the law has foreseen this possibility and it is not controversial.

Essentially, this action stems from two options: either Katnić chronically makes wrong assessments of the need for detention where it is not needed, for which he should be held responsible; or Katnic is right thinking that the legal conditions for custody are fulfilled, but Stankovic intervenes under political influence. Both of them cannot be right, and the one who made the wrong assessment, and not only once, should be held responsible.

2. Do you think his power in the state weakens after these cases?

Katnic’s power derives from the law and he still has the same rights and obligations as before. His reputation and trust of citizens in the work of the Special Prosecutor’s Office are another issue and there is no simple answer as the society is sharply divided regarding all issues, including in terms of attitudes about the work of the Chief Special Prosecutor. In any case, these cases illuminate the legal chaos and serious “illnesses” that affect our judicial system.

3. Does the situation in which President Vujanović appealed to HSP in the case of Medojevic and HSP said that before the decision he had spoken with DPS President Milo Djukanovic, constitutes an interfering of politics and interference of executive and judicial branches of government and how do you comment on it?

In the case of Medojevic, all sides sought “lowering of tensions,” but in the case of Mandic and Knezevic, one current pressed for no detention and the other for it to be ordered. Certainly this is not the first time it happens and it is no secret that our institutions are politicized and that they are not immune to the demands and comments of politicians, governing structures and opposition.

Independence, impartiality, accountability, professionalism and efficiency of the judiciary are the goals we are pursuing also with the reforms under Chapter 23 “Judiciary and Fundamental Rights” and all of these cases show how far we are from achieving the goals set.

It is interesting that in the Screening report of the European Commission for this chapter in 2012, Montenegro was recommended to “review the system of mandatory instructions within the prosecution system”, as this affects the independence of state prosecutors, which has obviously been neglected. The purpose of this recommendation is not to break the hierarchy in the prosecution but to introduce accountability, so that prosecutors are held accountable for their decisions instead of relying dependently on the formal and informal suggestions of their superiors, which is common practice in the Prosecutor’s Office.

4. After the stopped actions, one of the main affairs Katnic has initiated is Marovic case. Do you consider this case to be a fiasco of prosecution, given that Marovic is still unavailable to the authorities and has been punished with almost a minimum sentence?

The unavailability of Marovic is a major defeat of our judicial system and the state, and it best illustrates how we are not all equal before the law and to what degree are some individuals privileged.

5. To what degree has Katnic’s function and work been rendered meaningless after all this?

It is a fact that the Chief Special Prosecutor, by function, has one of the most difficult tasks – processing of organized crime and corruption at a high level. Due to this it is very likely that he faces a lot of obstacles and obstructions. However, the way in which he responds to obstacles and public pressure is unacceptable.

The most recent such situation happened yesterday, where the rights to privacy and secrecy of correspondence guaranteed by the Montenegrin Constitution of lawyer Rodic, who has not yet been indicted for any criminal offense, have been brutally violated by the Special Prosecutor’s act of publishing transcript of communication between Rodić and other individuals.

Even if the published communication undoubtedly proves that the crimes were committed, this evidence would only be valid once the court accepted it in court proceedings and it would be available to the public only if the indictment against Rodić was confirmed and then read during a public trial. Up until that moment, publishing a transcript of the lawyer is a brutal violation of his constitutionally guaranteed rights.

We had so far leaking of information from the Prosecutor’s Office and publishing of transcripts in the media, but this is the first time that the Prosecution has released for all the media evidence in the ongoing proceedings.

Interview with Dina Bajramspahic was originally published on FOS media website public trial. Up until that moment, publishing a transcript of the lawyer is a brutal violation of his constitutionally guaranteed rights.

We had so far leaking of information from the Prosecutor’s Office and publishing of transcripts in the media, but this is the first time that the Prosecution has released for all the media evidence in the ongoing proceedings.