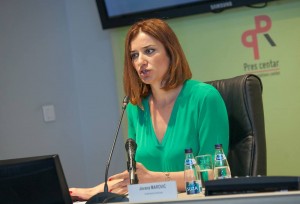 Agency for Prevention of Corruption should be operational by 1 January 2016. There is a vast array of preconditions for the commencement of functioning of this “emerging” institution and we chose four of them to test in practice.

Legality. The emergence of the key institution for prevention of violations of the legal order was marked by its flagrant infringement. A member of the Council of the Agency for Prevention of Corruption became a state auditor even though the Law on State Audit Institution explicitly forbids the Council members from becoming members of the management body of a legal entity. Since particular interests are above the law, the auditor with personal ties to the leadership of the Democratic Party of Socialists (DPS) is a better fit than independent candidates. The work of the Council of the Agency formed in this manner is regularly being additionally obstructed. For example, this body deliberated on the Agency Budget Bill only after the Government formally adopted it. Therefore, it had no way of influencing the final version of this document, even though the law and the Statute of the Agency alike stipulate that the Senate is the body which formulates the Draft Budget of the Agency. Additionally, the budget provides significant funds for equipping the offices of the Agency, which further implies the necessity of conducting procedures of public procurement. However, with the deadline for constituting this body quickly approaching, assessments on the necessity of conducting purchase without tender are often being made, which will in turn lead to the violation of the Law on Public Procurement. Unless somebody reminds us again that “conditions for implementation of one law cannot be created through violations of another”. Nonetheless, this is exactly what is occurring, since the Bill on Salaries of Civil Servants and State Employees does not stipulate the same coefficient for the director of the Agency and the Ombudsman, although the Law on Combating Corruption requires it. To summarize, two violations of the law committed and two violations in sight.

Merit-based principle. The Director is the central figure of the Agency. By the letter of the law, he represents the Agency, makes decisions, gives opinions, and proposes the budget and other acts of the Agency on its behalf. For these great competencies, a minimum of five years of work experience in the field of fight against corruption is required. However, the newly appointed director cannot recall any officials being convicted of corruption while he was the head of the police. Moreover, during submitting comments to the Rules of Procedure of the Council of the Agency, the director is uncertain as to how could a member of this body possibly be in conflict of interest. This question is raised by the same man with personal ties to the leadership of the DPS from the beginning of this text.

Efficiency of the Agency largely depends on the resources allocated for its work. For this purpose, the Government allocated funds which amount to exactly 0.2% of the total proposed budget for the following year. Thus, the least possible amount is assigned, not a cent more or a cent less than what was envisaged by the Law on Combating Corruption. This amount is calibrated through capital expenditure. Considering that the Act on Systematization and Internal Organization of the Agency is not yet adopted, it is unclear as to how the number of 50 employees who will be on the Agency payroll in 2016 was derived. Besides it being nice and round. In this manner, expenditures for employment contracts for “scarce expert knowledge”, training and consultancy services were planned, without prior analysis of the profiles of civil servants this institution requires. One-half of the total number of employees has yet to be hired. Not one open call was published so far.

Transparency. The director of the Agency did not allow for his job interview to be open to the public. The candidate for a holder of public authority who should convince the public in his capacities and vision for occupying such responsible position did not want for the public to hear what he has to say. Following his election, he additionally tried to make sessions of the Council of the Agency closed for the public. He offered a “convincing” explanation: “I am against the kind of transparency which is requested at this moment. Transparency is not prevalent if the Council member discloses to the public … what I, as the director, discuss with members of the Council about measures, projects, plans … Informing the public through the website and issuing press releases yes … but ensuring transparency through direct presence no. You need to understand that in this kind of agencies which deal with combating corruption and organized crime … for us to record our session and for certain members to reveal it somewhere, that is impossible. We cannot work like that, we cannot achieve results like that.”

“The story goes on and on without end.”

In short, four steps in establishing the Agency look like this: Violation of the law. Conflict of interest. Arbitrary determination of expenditures. Lack of transparency. When we cut the red ribbon at the New Year’s ceremony and celebrate establishing of the new institution, will you be able to place your trust in this kind of Agency?

Text originally published at the section ,,Forum” of Daily Vijesti