With the use of legal loopholes, persons convicted in the “Audio Recordings Affair” in Pljevlja have been appointed to new positions, while persistent efforts have been put into rendering meaningless inspection findings. Institute Alternative warns about “potential political influence” on the decisions of the Administrative Inspectorate.

The Ministry of Public Administration annulled the conclusion of the Administrative Inspectorate according to which persons convicted for the “Audio Recordings Affair” are deemed unworthy to work as managers in Pljevlja municipal services.

Deciding on the complaint of the president of Pljevlja municipality, Mirko Đačić, at the end of last year, the Ministry found that “involvement of the administrative inspector is unclear” when it comes to assessing whether the convicted Sead Vesnić and Joka Đačić, as well as their colleague Goran Čavić, meet the conditions for holding acting positions in municipal secretariats and services.

In the explanation of the decision, which the Center for Investigative Journalism of Montenegro (CIJ-MNE) has seen, it is written that no regulation recognizes the institute of acting official at the local level. This means that the Ministry has not questioned the fact that the persons convicted by law were appointed as acting officials, although, according to this interpretation, they should not be appointed as the law does not recognize them.

The Ministry of Public Administration now claims for CIJ-MNE that during proceedings, this department, as a second instance authority, rejected complaint of the president of the municipality as groundless. However, they did not mention in their official responses that they had previously adopted Dačić’s complaint or what has happened in the meantime, although CIJ-MNE had an insight into this decision as well.

The Ministry also pointed out that after it rejected his complaint, the president of Pljevlja municipality initiated administrative dispute by filing a complaint before the Administrative Court against their decision and that this dispute is ongoing.

Joka Đačić, who was appointed Acting Head of the Civic Bureau, was sentenced to six months of suspended sentence for buying votes ahead of the 2014 local elections. Vesnić, appointed as the Acting Secretary of the General Administration Secretariat, received the same sentence for abuse of short-term assistance of the Center for Social Work ahead of the parliamentary elections two years earlier.

On the other hand, Administrative Inspectorate disapproved of Čavić because he had not passed a professional exam for managing the Protection Service.

The Inspectorate conducted municipal supervision at the end of 2016, following a report filed by Democratic Front.

According to the IA, the Law on Civil Servants and State Employees, which applies also to the local level, prescribes a criterion by which an authority cannot enter a work agreement with a person convicted of crimes that make them unworthy of performing these jobs.

“The Administrative Inspectorate recognized irregularities in regard to appointment to the leadership positions of persons who did not fulfil requirements because they were convicted of criminal offenses. However, after the president of the municipality filed an appeal, the Ministry found that the institute of acting official is not regulated by the Law on Local Self-Government and that the Law on Civil Servants and State Employees is applicable only to the rights and obligations of local officials. Accordingly, the Ministry considered that irregularities were not properly determined in the given case and annulled the decision of the Administrative Inspectorate, “as explained by IA.

This NGO claims that this case is illustrative for several reasons. First, they state that the established irregularity has been relativized by the fact that the appointed persons are not employees, but acting officials, and the application of regulations from the state to the local level is possible only in relation to employees. The IA says that the Ministry established that the institute of acting official as such does not exist at the local level, and has not taken a stance in regard to that and a number of other irregularities. 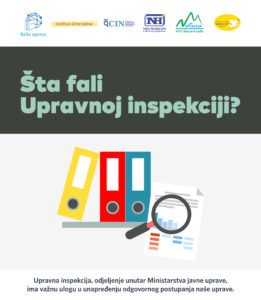 In its report, Institute Alternative concludes that capacities of the Administrative Inspectorate are still not fully realized, which is also reflected in its work pace. In support of this, they claim that in some cases, according to the collected data, reports are drafted four to seven months after the supervision.

“Strengthening the capacity of the Administrative Inspectorate is not only a priority in the public administration reform, but also a direct commitment of the Government under Chapter 23 (Justice and Fundamental Rights) of negotiations with the European Union. In the reporting period, the number of administrative inspectors has increased from a record low number of four administrative inspectors (in early 2017) to eight, which was the number of employees in March 2018, according to the latest published list of employees in the Ministry. This still represents just over half of the number envisaged by the act on internal organization and systematization of the Ministry, “reads IA report.

However, this NGO states that following the dismissal of the Chief Administrative Inspector, Dragica Anđelić, in March last year, the top position in this department remained vacant, as confirmed by the list of employees at the Ministry’s website.

According to the IA findings, reporting on the work of the Administrative Inspectorate is rather terse, so it is impossible to estimate how effective it really is in practice.

The Ministry’s statistics show that last year there were 438 supervisions conducted, of which 69 regular, 293 extraordinary and 76 control inspections. 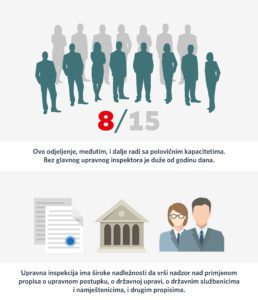 IA highlights that, during this period, 266 irregularities were established. They consider this to potentially indicate a high proportion of irregularities that inspectors find during supervisions. According to monthly reports on the work of the inspection, submitted to IA, there are almost three times more remaining than removed irregularities.

Most of them were filed by the municipalities of Rožaje and Kolašin, which in 2016 was the most frequently controlled municipality, as earlier reported by CIJ-MNE.

In the Rožaje municipality, 46 irregularities were established last year, 24 control supervisions were conducted, and irregularities were not removed in 23 cases. This municipality has not answered CIJ-MNE to what extent they applied the Administrative Inspection orders, nor about the outcome of disputes they have initiated against this authority. The office of the president of the Municipality of Kolašin said that they have implemented every order of the Administrative Inspectorate that was based on law and justified.

“For those we considered to have no legal grounds, we initiated appropriate proceedings. Hence, an administrative dispute was initiated against seven orders for removing irregularities, of which three disputes have so far been completed, all three in favor of Kolašin Municipality. Also, administrative disputes were initiated against seven conclusions on sanctions, two of which have been completed, also in favor of the Kolašin Municipality, “reads their reply.

The Kolašin Municipality emphasized that the Administrative Inspectorate accepted their requests for delaying execution of conclusions on sanctions until the completion of proceedings, so the penalties that were “dropped” by the Administrative Court were not paid.

Ministers Complain Even About Symbolic Penalties

Besides the case of Pljevlja, the Ministry of Public Administration annulled, though partially, the decision of the Administrative Inspectorate after the appeal of Minister of Transport and Maritime Affairs, Osman Nurković.

In mid-2016, the Inspectorate pointed out to the then Minister of Transport and Maritime Affairs, Ivan Brajović, irregularities related to the dismissal of Mladen Lučić, tied to Social Democratic Party (SDP), from the position of the Director of the Port Authority and fulfilment of that position on the basis of a public call.

Vladislav Stjepčević (Social Democrats) replaced Lučić, and inspection found that he had received appointment decision days after the Government sitting, without waiting for the next sitting and verification of minutes from the previous one and started performing duties of the Director of the Port Authority “before the decision entered into force”.

As the Ministry of Transport and Maritime Affairs had not given notice of the measures and actions they undertook with view to removing the irregularities, the Inspectorate fined the Ministry with 500 and Brajović with 50 euros. Due to the non-implementation of measures from 2016, the Administrative Inspectorate re-imposed fines in September 2017, this time on newly appointed Minister, Osman Nurković, and, again, the Ministry of Transport and Maritime Affairs. They were fined 100 and 1000 euros respectively. 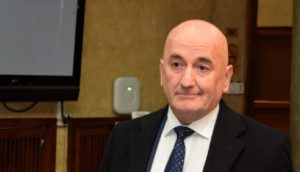 Nurković complained to the Ministry of Public Administration that the Inspectorate could have affected the removal of irregularities in a different way, even though, according to the position of the Government Department he leads, there were none. He also stated that at the time of the adoption of the decision in 2016, he was not a minister and that more lenient, minimal measures could have been applied. Nurković pointed out that the Inspectorate did not choose a minimum fine of 50 euros for physical and 500 for a legal person, “but it twice increased the statutory prescribed minimum even though Osman Nurković had not been punished previously.” 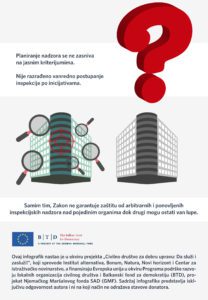 The Ministry of Public Administration, deciding on the complaint, partially annulled the Administrative Inspectorate’s decision in the part relating to 100 euros fine imposed on Nurković.

The Administrative Inspectorate said that they reduced the fine imposed on Nurković in the course of repeated procedure to the amount of 50 euros.

In 2016, the Administrative Inspectorate determined irregularities in the Municipal Police Service in the Municipality of Rožaje. At that time, inter alia, it was found that, five inspectors, municipal police officers and supervisors were permanently employed by a decision of the Mayor without a prior public call for fulfilling these positions. Some of them filed a complaint to the Ministry of Public Administration, but this department dismissed them at the end of last year.

CIJ-MNE earlier published that Rožaje municipality hired 189 persons in the period from 2014 to 2017 despite the fact that they signed a tax debt rescheduling agreement, and salaries are almost half a year late.

The article was produced within the project “Civil Society for Good Governance: To Act and Account!”, Implemented by the Institute Alternative, Bonum, Nature, New horizon and Center for Research Journalism, and funded by the European Union within the Civil Society Facility , and the Balkan Trust for Democracy, a project of the German Marshall Fund of the US (GMF). The contents of the blog are the sole responsibility of the author and can not be taken to reflect the views of the donors.