Montenegro has stagnated in key areas of rule of law, and backslided in the area of cooperation of the Government with NGOs, it was concluded at today’s event organised by Institute alternative (IA).

Today, a day before publication of European Commission’s (EC) report on Montenegro 2016, IA presented key findings of the research “Monitoring and Evaluation of Rule of Law in Montenegro”, with a focus on state of play in the following areas: reform of judiciary, public administration and police, fight agaist corruption, integrity of electoral process, protection of human rights and control function of the Parliament. 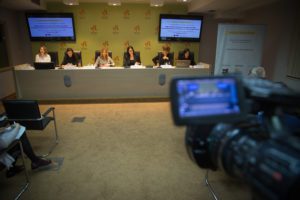 Dina Bajramspahić has pointed put that key problems identified at the very beginning of reform of judiciary remain a challenge, particularly in terms of accountability, independence and impartiality.

“This primarily includes issues regarding the appointment and promotion of judges and state prosecutors, transparency in relation to the appraisal system, criminal liability and disciplinary and ethical responsibility, as well as the rationalisation of the judicial network”, she added.

Bajramspahić added that the most recent case of appointment of the judge of Administrative Court raises the question whether the discretionary appointment of judges will take precedence over references and achieved results.

Namely, in this case, Administrative Court has took the position that Judicial Council has wide competences to evaluate all criteria for appointment of judges and to give priority to certain judges, regardless the score of the candidates.

Milena Milošević pointed out that lack of transparency on public finance represents a main black hole of governance in Montenegro.

“The way of spending of budgetary reserve remains secret. We do not know to whom and based on which criteria 62 million euro from the budgetary reserve has gone since 2012 onwards”, she said, reminding that even the information on the finances of Montenegrin municipalities has been declared confidential.

Ana Đurnić referred to the work of the Agency for Prevention of Corruption, 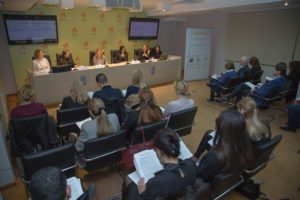 whose previous work largely confirmed the warnings from the paper that the IA announced earlier this year – “Happy New Agency!”.

“The Agency is passive in cross-checking assets declaration of public officials, while all the imposed penalties are bellow legal minimum”, explained Đurnić, clarifying that the Agency cross checked only one fifth of assets declaration for first six months of its work.

She added that the practice of closing its work for public that started with appointment of its director, has continued ever since, and pointed out that registers of donations and sponsorship to the political subjects should be more transparent.

Đurnić stressed that the work of the Special State Prosecutor’s Office is an isolated example of progress in the rule of law area, despite the fact that its results so far remained limited to the prosecution of cases of corruption in Budva.

Aleksandra Vavić referred to police reform, noting that only a third of the measures planned by the Strategy for Development of the Police was implemented during the first six months of 2016.

“”A large part of the activities implemented so far relates to initiating changes and the development of a normative framework,” explained Vavić.

She considers that the least has been done in the area of establishing electronic records. “The key records are still missing, including Records of persons

She believes that the least has been done in the area of establishing electronic records. “The key records are still missing, including Records of persons towards who the secret surveillance measures have been applied”, although, warns Vavić, those are measures that temporarily restrict citizens’ constitutionally guaranteed rights.

Ivana Bogojević warned about a worrisome fact that there is no significant progress in the area of media freedoms and freedom of expression.

“Attacks on journalists are not being qualified as criminal acts, and necessary amendments to the media laws, that would guarantee more independence of public service, better protection of integrity of journalists as well as bringing order to the market of electronic media, have not been adopted”, she explained.

When it comes to freedom of assembly, some progress has been achieved, but excessive use of force remains unresolved and problematic issue.

“State Prosecution, even a year after the October protests did not solve cases of beatings of citizens and journalists by the officers of Special Antiterrorist Unit (SAU). It is particularly worrisome that we yet do not know who was hiding behind 28 masks of SAU officials, which have participated in brutal beatings of citizens, while only one person – commander Lješković is waiting for a trial”, considers Bogojević.

Milica Ražnatović reminded of the failure of building trust in the electoral process in Montenegro, and in that regard she particularly pointed out the passivity of State Electoral Commission.

“State Electoral Commission did not publish information important for pre-electoral process, such as, for example, verification of voters list. In only one case and under significant public pressure, the Commission published Opinion concluding that the Law on Personal Identification Document and the Law on Election of Councillors and Representatives are complementary”, reminded Ražnatović.

Statements on phantom voters in the voting list are also a matter of concern. Special Prosecutor’s Office is also not up to their new powers. 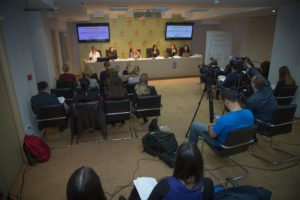 Finally, Aleksandra Vavić additionally referred to the control function of the Parliament, which remains weak despite increased use of certain control mechanisms over the executive.

Vavić particularly emphasised that the Code of Ethics of the MPs has been rendered meaningless by refusing to discuss on the cases of its violation.

She recalled that after the incident in the Parliament during which there were a mutual insults of the MPs of the Democratic Front and the President of the Government, charges for violating the Code of Ethics were filed against seven MPs.

“Although deputy chairman of the Committee on Human Rights and Freedoms from the ranks of the opposition coalition has jurisdiction for convening the sessions, she did not do it. After that, President of the Parliament convened the session, but it was not held due to lack of quorum”, she recalled.

The presented research have been conducted within the regional project “Monitoring and Evaluation of the Rule of Law in the Western Balkans – MERLIN WB”, which we implement together with the European Policy Institute from Skopje and Belgrade Centre for Security Policy from Belgrade, with the financial support of European Fund for The Balkans.