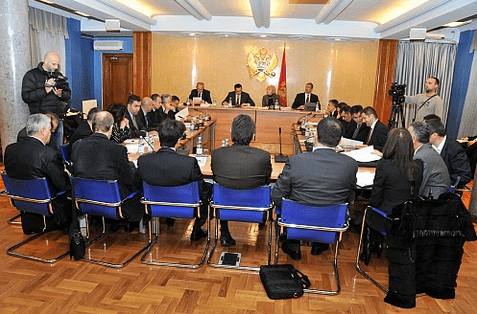 Stevo Muk, President of Managing Board of the Institute Alternative, also accepted invitation for attending the session, in order to present his views on the 2013 state budget.

The following is an extract from the Muk’s Commentary on the Proposal of Law on Budget of Montenegro for 2013, which is discussed at today’s meeting:

(…) We believe that the significant role of the Parliament is achievable by making radical changes in the procedures and deadlines through which the executive authority prepares budget and submits it for consideration and adoption.

In addition to the circumstances that this year led to the the fact that in a last working week the working bodies of the plenum discussed the budget, the procedure itself is systematically placed in such way that the role of the Parliament is reduced to the approval of what the executive authority prepared, without the possibility of substantial contributions or oversight.

The executive authority has been preparing the Proposal of Budget for more than ten months of the current year, and the Parliament, civil society, experts and interested citizens are completely excluded from the process.

The budget is presented to the Parliament too late, and, in the years when there is no parliamentary elections, the Parliamet has less than a month to consider it and adopt it. The terms of the systematic Law on Budget are not in accordance with the international standards, which require its submission at least three months before the start of the fiscal year to which the budget relates. This issue has not been resolved either in the Draft on Law on Budget and fiscal responsibility which is currently a part of the public hearing.
In this way, MPs are tighten up – the preparation of the budget is finalized and in many aspects, such as the capital budget for example, it is impossible to influence because of the specific way of its formulation.

Low participation of the Parliament in the process of budget formulization and adoption contributes to the delay in implementation of the budget. This year’s Proposal of Budget has programs for almost all consumer units, but does not have performance indicators through which MPs and the public itself could see for what the consumer unit receive the money, which shall be done during the 2013, which goals are set in front and what indicators will measure its success in achieving these goals.

On the other hand, the delay in the budget implementation produce difficulties in exercising the budgetary spending control which goes beyond of questioning the legality. For SAI is therefore difficult to perform audit of budget users, and even the Parliament can not reliably perform oversight of budget execution and evaluate whether the consumer units meet the objectives for which funds were approved.

The Ministry of Finance has not adopted the promised Action plan for implementation of the program budget. We remind that the original deadline for all spending units to introduce a program budget with clear indicators used to monitor the achievement firstly set for 2009. Then the deadline was extended to the end of 2012, and in the Action plan for implementation of recommendations of SAI we can see that this deadline was once again extended to 2013.

Even in this year’s Proposal of Budget can’t be seen how many funds will Montenegro spend on participation in peacekeeping missions, or on participation of members of the Armed Forces, or members of the civil defense, police and employees of the public administration. It is time for this activity and significant expense to be shown in the budget as a separate program within the competent consumer units, because in this way the Parliament gives blanko support without images of the actual cost.

It is incomprehensible that the budget of the Agency for the Protection of Personal Data for the following year is almost 20% lower compared with the current year and that the amendments to the Act on Free Access to Information made an amend of the jurisdiction of this institution in the part which regulates the appeal procedure in a case of denial of access to information.

Within the budget of the Ministry of Finance, it’s not seen how many funds will the Government set aside for the the next year for the development of the system of internal financial control in the public sector, with the position of the central harmonization unit, which is the driving force of the entire process. This important project of reform of public finances should not depend on volatile donor support, but must also have strong support from the state. According to data of the Institute Alternative, the coverage of public sector by internal audit is insignificant and is reduced to thirty consumer units which are systematized (and in most cases do not fill positions) units of the internal audit, which indicates the need for significant investment.

Finally, we consider it’s necessary to submit amendments to the Proposal of Law on Budget in order to introduce penalties for those offenses SAI registers every year in the audit of final account of the budget. If we wait issue of sanctions in the Law on Budget to be resolved systemically, it will take several years before these provisions come into force, and begin to create impact, and the persons in charge will continue to violate the Law with impunity. We would like to note that it is necessary to sanction the diversion of funds to consumer units by the Government, but also within individual programs and expenditures in the budget spending units above the minimum allowable by law, the use of funds from the capital budget for the current, the payment of wages to other positions other than for gross earnings, reporting on the capital budget, the use of commercial accounts and transactions outside the treasury single account, use the current budget reserve, and so on. We believe that this is necessary in order to finally determine the responsibility for the irregularities and illegalities repeated from year to year in the management of recurrent budget and its execution. (…)