Despite claims about irrational expenditures in the health system, the Minister of Health, Kenan Hrapović, has employed 7 persons in the Ministry since the beginning of his term, without public competition. According to several sources, among the new employees is Minister’s sister-in-law as well.The Centre for Investigative Journalism in Montenegro (CIN-CG) asked Hrapović why there were no public competition for the 7 new work places and what kind of contracts the new employees have. The Ministry’s response states that recruitment procedures are ongoing, according to the new systemization and “in accordance with the law”.

The list of employees of the Ministry, headed by Kenan Hrapović, has not yet been published or updated on the website, contrary to the Law on Free Access to Information (which prescribes proactive publishing of this list).

However, he argues that he will make decisions and publish the list of employees within 30 days from the start of enforcement of the new systematization act.

Currently, Ministry of Health has 52 employees. During the mandate of Budimir Šegrt (who preceeded Hrapovic), there were 45 employees.

According to the “off-the-record”information obtained by CIN-CG, in the first quarter of this year, Hrapović submitted to the Government’s Commission for Economic Policy and Internal Systems a Draft Rulebook on internal organization and systematization. The Draft envisages that the Ministry of Health should have as much as 81 employees. According to sources from the Government, KEP refused to give a green light to this document. Following this, Ministry submitted a new draft, with number of employees reduced 76. Both the KEP and Government approved the new proposal.

The Ministry confirmed that KEP had objections in regard to the planned number of employees, which were accepted and number was reduced to 76.

Also, Hrapović has increased the number of employees in his office, after assuming the minister’s post. As several sources claim, he appointed a close relative of his wife,. Alma Marić, as a technical secretary. CIN-CG did not get a response about the kind of family relation between his wife and the Technical Secretary.

Photos of Marić, Hrapović’s children and wife can be seen on social network – Facebook. At the account of Krapović’s daughter, Marić is marked as a member of family, or more precisely as an aunt.

Employment of Marić is not the only peculiarity. Upon assuming the office, Hrapović proposed, and the Government appointed, the former Chief Budget Inspector, Milovan Vujovic, as a State Secretary in the Ministry of Health. Vujovic previously controlled whether Hrapovic’s expenditure during his term as dicrector of the Health Insurance Fund. Vujović’s finding, which was positive, was then a subject of dispute between Hrapović and the former Health Minister, Šegrt. At the time, Šegrt argued that Vujović had not done the good job and that the report had not tackled the initial subject of control.

Hrapović appointed Alma Drešević as head od one of the Ministry’s organizational units. She had previously worked in Podgorica Health Centre as a paediatrician and she is also the wife of the Bosniak Party official,. Nedžad Drešević. Centre for Civic Education (CCE) argues that this was a political appointment, which demonstrates that coalition agreements clearly pose a threat to the great promises of professionalization of the state administration..

It is interesting that Hrapović’s Office employs three public relations experts, whereas previously solely one person performed this job.

Secretary employed before the public competition

Hrapović answered that the Technical Secretary in the Ministry, Alma Marić, has been employed in accordance with the law, which prescribes the manner of taking over of civil servants between state authorities. She previously worked in the Health Insurance Fund, which was managed by Hrapović.

This means that the position of technical secretary, which previously did not exist in the systematization, was filled, and employee was taken over from the other authority before the workplace was even established.

By law, take-over between national authorities is possible only if a state authority or its part of are abolished, and its tasks are taken over by another one. Only on May 27, an internal announcement for the technical secretary was published. 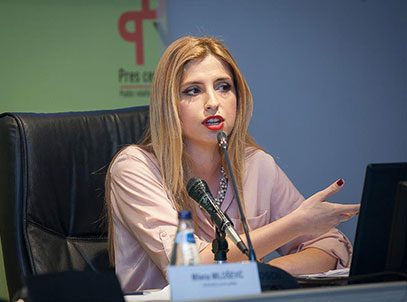 Public Policy Researcher at the Institute Alternative, Milena Milošević, assessed this is as a kind of stunt, if a civil servant was employed at the Ministry before the adoption of the new rulebook. With this, systematization of jobs is rendered meaningless.

“This situation shows that takeover is used in a manner not prescribed by the Law on Civil Servants. Namely, unless the authority does not take over a scope of work which previously belonged to another authority, take over may not be the basis of employment and it is clear that it is only used to bypass the obligations of public and open competition of candidates for the new position”, Milošević said.

“We look upon more developed countries”

The Ministry told CIN-CG that it is among the ministries with the lowest number of systematized work places and that the Rulebook was made under the new approach compared to the previous one. It was modelled on the rulebooks of the ministries of developed countries.

They also claim that the number of systematized work places does not mean their filling. In its response, the Ministry said that the number of employees in the pharmaceutical field has been increased, in order to, among other things, affect the rational use of medicines, but also that a new Department for Internal Audit has been established, which is of great importance. They also state that the organization of work is “adapted to the adopted strategic documents and legal solutions, as well as practice in neighbouring countries and the EU.”

Human Resources Administration had proposed Amendments to the Rulebook

According to unofficial information of CIN-CG, a negative opinion on the both Rulebooks of the Ministry of Health was given by the Human Resources Management Authority (HRMA).

Director of HRMA, Svetlana Vuković, responded to CIN-CG that since the beginning of the year they have given two opinions on the Draft Rulebook on internal organization and systematization of the Ministry of Health.

First time, the opinion on the Draft Rulebook was given on March 30.. Vuković

said that the Ministry submitted a new proposal on April 11, to which the opinion was given two days later. “In the opinion, the Human Resources Management Authority pointed to the necessity to harmonize jobs in the Directorate for International Cooperation and Harmonization of Regulations with the Decree on the criteria for internal organization and systematization of jobs in the state administration,” Vuković replied. It is in this Directorate that 10 persons should be employed, according to the systematization.

According to the previous systematization of jobs, the Directorate did not exist, but a Direction with twice fewer employees.

Article is originally published at the website of the Centre for Investigative Journalism.

You can read the story in Albanian language here.

This article was created with the assistance of the European Union within the project “Civil Society for Good Governance: to Act and Account!”, conducted by the Institute Alternative, Bonum, Natura, New Horizon and the Centre for Investigative Reporting. The contents of this article are the sole responsibility of the author and in no way reflect the views of the European Union.