Skip to content
Institute Alternative » Accountable public finances » Do we need a special parliamentary Committee for Budget and Audit? 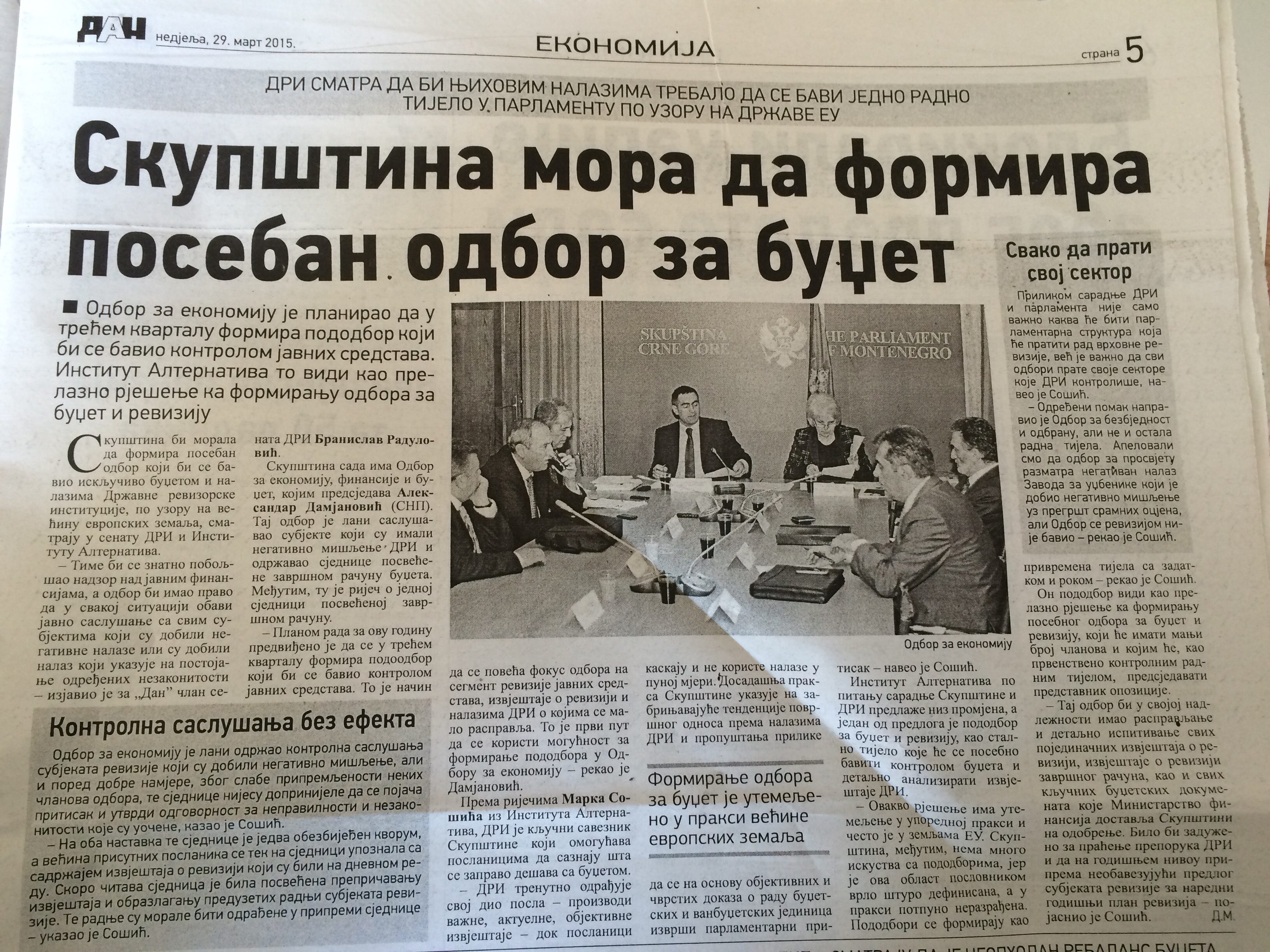 Parliamentary (political) control of the budget relies on the work of the State Audit Institutions (SAI) in regard to the oversight of the directing and spending of the budgetary funds. SAI is the key partner of the Parliament because it allows the MPs to find out what exactly is happening with the budget. At the moment, while the SAI does its part of the job – produces important, updated and objective reports, the MPs are lagging behind it and not using the reports to the full extent. Although our research show that the certain level of improvement was reached, the practice until shows worrying tendency of maintaining the superficial attitude towards the finding of the SAI and missing the opportunity to exert the parliamentary pressure on the budgetary and extra-budgetary units on the basis of the objective and solid evidences of their work.

In that context, herewith we recommend the series of changes in the way of cooperation between the Parliament and the State Audit Institution.

Committee or subcommittee on Budget

One of the proposals is to establish the subcommittee on budget and audit, within the Committee on Economy, Budget and Finances, which would be the permanent body which would deal with the oversight of the budget as well as to analyze in details the increasing number of the audit reports published by the SAI.

It is important that from broad scope of work within the competence of the Committee on Economy, Budget and Finance, the audit activity and political control over the budget, with its planning and execution, concentrate in a special subcommittee.

The Parliament of Montenegro does not have much experience with the subcommittees. The regulations are poorly stipulated in the Rules of procedure, while this area of the parliamentary work is undeveloped in the practice. It is necessary to establish the parliamentary structure which would permanently deal with the budget and audit. However, the Rules of Procedure stipulate establishing the subcommittees with specific task and the deadline for its accomplishment; therefore, they are meant to be ad hoc, temporary parliamentary structures.

For the time being, there is only one Subcommittee, within the Anti-Corruption Committee and the Committee Political System, Judiciary and Administration, established in 2013 and without a single session held since then, to our knowledge.

We see the Subcommittee on budget as the interim solution toward to establishment of the special committee on budget and audit, which would have fewer members and which would be, as primarily control body, be chaired by the representative of the opposition, who would be focused and committed to address the issues of control over the budget, in all the complexity of the field. This solution has the basis in comparative practice and is particularly common in EU countries.

What would this Committee do?

Among other things, such committee would have in its jurisdiction to examine in details all the individual audit reports, audit reports of Final budget account of Montenegro, the annual report on the work of SAI, as well as all of the key budget documents that the Ministry of Finance submits to the Parliament for approval. This body would coordinate the discussion on the proposed budget lead in the committees. It would be responsible for monitoring the implementation of SAI recommendations which are adopted in the form of parliamentary conclusions and to assess the degree of realization. It would also be responsible to annually prepare a non-binding proposal of list of auditees for the next annual audit plan of SAI. Through such body its advisory role would come to the fore and it would be in charge, if necessary, to initiate amendments to the legislative framework based on the findings and recommendations of SAI. Important areas would be the internal audit which is currently completely neglected, as well as issues related to local budgets and local government finance system.

Important role of the Parliamentary Service

One of the most important things that needs to be changed in the Parliament is the structure of it expert service – the core of experts on the budget must be formed, which would be on equally footing with experts from the SAI and the Ministry of Finance and able to deal with public finances and provide support to all the committees and all the MPs. Many parliaments in the world have so called “budget office”, formed by a group of experts who, unrelated to the changes in the composition of Parliament, help during the process of adopting the budget, monitoring its execution and audit and control activities in a professional, effective and in depth approach.

The Committee on Economy, Finance and Budget currently has six servants who work on all points of the agenda, starting from technical-administrative issues up to preparation of materials and analysis for the needs of Committee which are numerous due to broad range of competencies not allowing their further specialization.

All committees should follow the work of the SAI

In the whole story about the cooperation of the SAI and the Parliament, is not only important what would be the parliamentary structure that will monitor the work of the SAI. It is also very important that the reports produced by the SAI are being followed by all committees, for their sectors. Some progress has been made in this regard in the Committee for Security and Defense, but not in the other working bodies.

Previously, we have appealed to the Committee on Education, Science, Culture and Sport to consider the audit report about the Institute for textbook publishing and teaching aids, which received a negative opinion with a handful of shameful score on how they managed the budgetary funds. Unfortunately, our appeals were in vain and the Committee did not deal with aforementioned audit report.

Last year, the Committee on Economy, Finance and Budget took a step forward in terms of dealing with the state audit and held control hearings of auditees who have received a negative opinion. However, despite good intentions, due to poor preparedness of some members of the Committee, the session did not contribute to increase of the pressure and nor did it determine the responsibility for the irregularities and illegalities observed.

Specific plans for solving this issue

The Committee on Economy, Finance and Budget has stated in its work plan for 2015 to establish a subcommittee for the budget that will deal with the control of public spending.

The SAI itself has planned in its Strategic Development Plan the improvement of relations with the Parliament through the stipulation of new procedures of cooperation.

In order to help this change to come true, Institute alternative will organize a meeting between members of the Senate and MPs who are members of the Committee on Economy, Finance and Budget, in order to define the future direction of cooperation and specific mechanisms for improving relations.

To this end, we will prepare a comparative analysis of the best practices of parliaments and state audit institutions, with a proposal of specific measures that can be applied in the context of Montenegro.