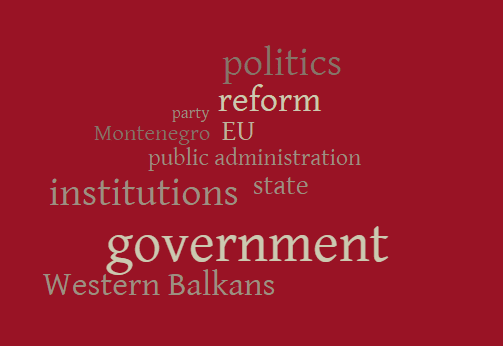 The “embrace” of the ruling party and the state, present in Montenegro for more than two decades, has a negative effect on depoliticisation of Montenegrin public administration, said Milena Milošević, researcher at Institute alternative at the conference organised by German Aspen Institute and the Ministry of Foreign Affairs of the Republic of Serbia.

The conference „Democratic Governance and Public Administration Reform in the Western Balkans“ was held in Belgrade on June 15 – 18, 2015.A representative of the Institute alternative (IA) was a speaker at the panel discussion, within she presented the paper “Impediments to Depoliticization in the Western Balkans: Case of Montenegro”.Milena Milošević has reminded that the need for depoliticisation of the public administration in Western Balkans is a “vicious circle”, bearing in mind that the politicians are expected to effectively implement the requirements of the European Union, who are increasingly political rather than technical and economic, and could have painful consequences for those who are expected to follow.

Even though all countries in the region share similar post-communist legacy, our researcher recalled that the specificity of Montenegro is a party system with a predominant party, characterised by the blurred boundary between the state and the party.

Also, she pointed out that the public sector in the country is still bloated and counts over 50 000 people, which represents more than a third of total employment in the country with about half a million voters.

In Montenegro, the argument that there are too few positions in the public sector and too many voters, therefore, is not applicable,” she added.

Our representative also reminded of the IA research results in the field of public administration, employment in state and local authorities and the professionalisation of a senior civil service.

„Limiting discretion in employment is a key for establishing a merit system in public administration. However, our findings show that the new legislation failed to significantly limit the arbitrariness in employment in state bodies”.

In order to ensure a sustainable impact on the changes in the country, we need strong institutions, an it could hardly be institutions whose leading positions are not filled on the basis of merit and objective criteria, reminded Milosević.

“Although the position of senior managers and heads of authorities are, in theory, professionalised, maybe even more than in some EU countries, according to our findings, about 90 managers are simultaneously members of management and advisory bodies of political parties currently in power. Additionally, there is no special competency framework for these positions, and even though Human Resources Management Authority has adopted a special pilot training program for their professional training, senior managers are still not attending them end have no awareness of the need for further professional development. “

The main agents of change, considering the previous limitations, may not be the institutions themselves, but they must have the support of the civil society organisations which are already playing an important role in monitoring the implementation of reforms, forming coalitions across the region and advocating depoliticisation, which is essentially a long – term cultural change, Milošević concluded.

The conference of the German Institute, organised for the first time at the capital of Serbia, had involved a number of senior representatives and renowned experts from the region and the EU.