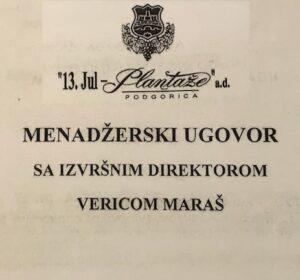 The contract that we could not obtain before, we received after Ms. Maraš resigned, and a new CEO was appointed (and we were persistent as well).

Manager’s contract with Verica Maraš, which was extended for another 5 years in 2018 – available at: https://bit.ly/35oPtr4

We thank the new executive director, Mr. Vuković to whom we have already sent a new request, asking for the contract that he signed. We will search ask for contracts until they start publishing them by themselves (and during their own term in office).