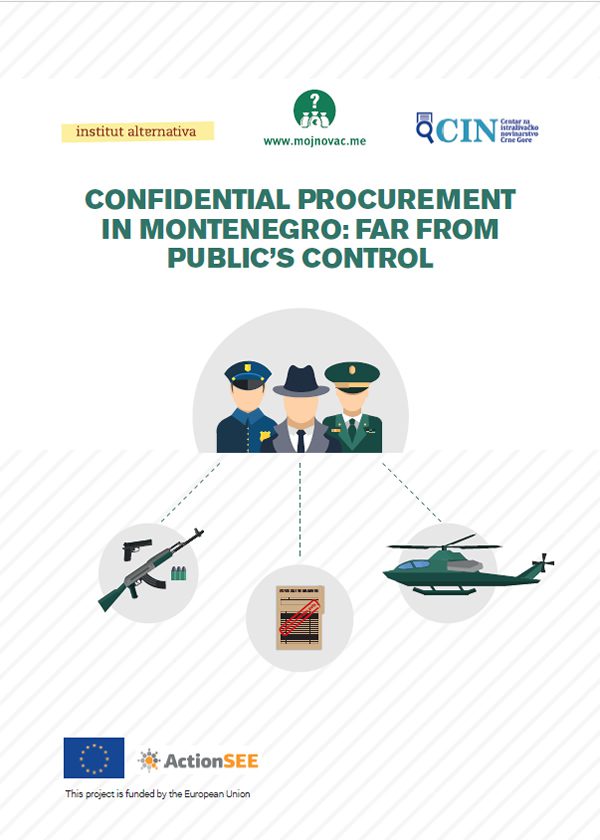 Confidential procurement involves purchasing of goods, works, and services, such as weapons, ammunition, and other special equipment used for protecting the security of the state and its citizens. However, apart from being confidential, these procurements are also public. This is true primarily because they are procured using public money, i.e. the money of citizens, but also because concluding procurement contracts between the state, i.e. public authorities, and the companies which produce this type of goods, services, and works are public, state affair. Therefore, the nature of confidential procurement is somewhere between public and confidential - the public needs to know how this money is spent and whether it is well managed, but there is also the need to protect sensitive information about these procedures that could potentially jeopardize the security of the state and its citizens.

Despite frequent amendments to the rules governing this area, it is still insufficiently regulated and far from being in compliance with the EU regulations. The key shortcoming lies in the fact that these legislative solutions make the conceptual difference between the notions of “confidential procurement” and “security and defence procurement”, which also negatively affects the regulation in this area. The first is stipulated as an exception to the implementation of the law, without explanation on the basis of which law will they be implemented, while the second is regulated under the Law on Public Procurement, although insufficiently. The legislation currently in force regulates this area too succinctly. Namely, the Law on Public Procurement dedicated only two articles to this topic while the envisaged bylaws are not yet adopted, although the deadline for their adoption has passed.

Reports of the State Audit Institution (SAI) are a rare testimony of the manner in which contracting authorities conduct confidential procurement procedures and show that reduced transparency characteristic for these procedures is being misused. Namely, MoI, Ministry of Defence, and the NSA used these procedures to procure goods, services, and works whose purpose and essence is not the safety of the state and its citizens, such as car tires, air tickets, computer equipment, and official vehicles.

In order to improve efficiency and control in this area of public spending, it is primarily necessary to equate the notions of “confidential procurement” and “security and defence procurement” under the Law on Public Procurement. Additionally, it is necessary to precisely define the notion of “security and defence procurement” under the same law and to regulate in detail the procedures which can be applied, the method of collecting and evaluating bids, planning and reporting, and protecting the rights of bidders. The legal framework should ensure compliance with the general principles of competitiveness, equal treatment of all participants in the process, and non-discrimination, as prescribed under the European Union directives regulating this area.