In addition to the specific equipment needed for the security of the state and citizens, purchase of ordinary computers and passenger cars also slipped through under the veil of secrets of procurement worth millions. In a significant number of cases, only one bidder participated in tender.

In the last five years (2013-2017), the Ministry of Interior (MoI) and the National Security Agency (NSA) spent more than eight million euro on confidential procurement.

In addition to the specific equipment needed for the security of the state and citizens, these two institutions slipped through under confidential procurement worth millions, purchase of ordinary computers, passenger cars and tires. In most cases there was no competition on tenders, as only one bidder participated in each tender.

The Ministry of Defence has not provide answers on the amount spent for confidential procurement by the publication of this research.

Despite the huge amount of money being secretly spent, the legal framework in Montenegro still does not provide for a unique approach in regulating this area. It is a source of possible problems and abuses that this area is increasingly regulated by by-laws and internal acts, which are often unavailable to the public.

Confidential procurement refer to procurement of goods, services and works, such as weapons, ammunition and other special equipment used for the protection and security of the state and citizens. According to data obtained from the NSA, in 2013, €289.947 was spent for this purpose, and slightly less in 2014 – €154.635. In 2015, the NSA spent €329,745 in this way. The value of public procurement of the Agency in 2016 was €445.784, and confidential ones – four times more, €1.953.086. The CIJ-MNE sources from security circles say that the NSA bought tracking and eavesdropping devices that year. The Agency has not submitted data on last year’s expenditure for confidential procurement.

In the system in which illegalities occur in the implementation of public tenders, the danger is even higher in confidential procurement, given that citizens’ money is being spent without public insight and with insufficient control.

“Apart from being confidential, these procurement are also public, because they are procured with public money – citizens’ money, but also because this is a public, state affair – concluding a contract for procurement between the state and private firms,” says Ana Đurnić, public policy research at Institute Alternative for CIJ-MNE. 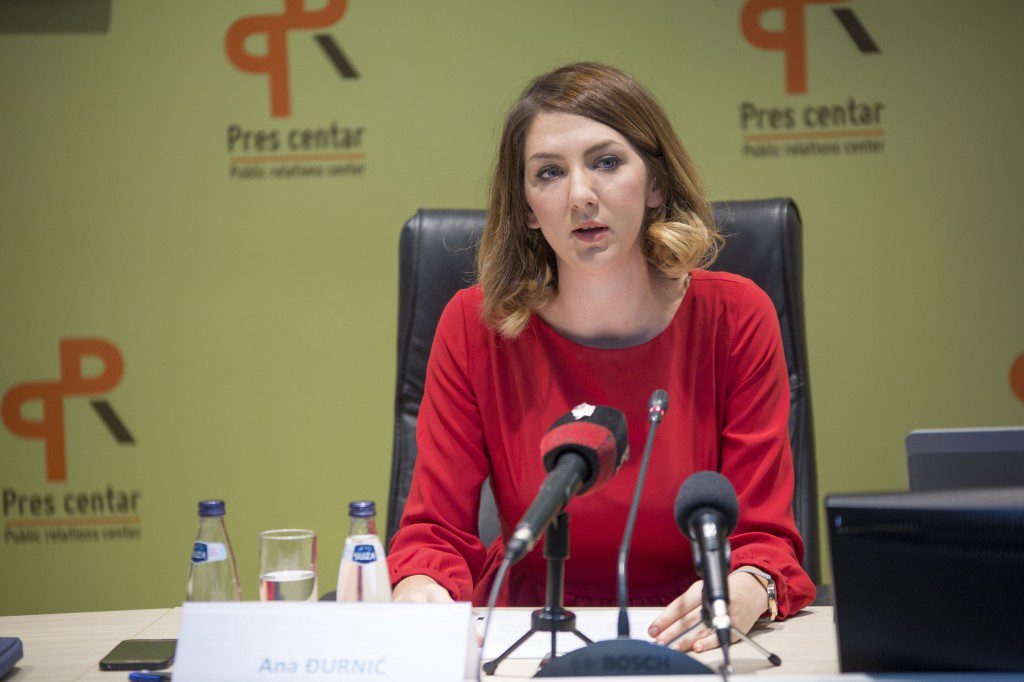 She explains that the nature of confidential procurement is somewhere between public and secret: “On the one hand, there is a need for the public to know how this money is spent and whether it is well managed. However, there is also a need to protect information about these procurement due to security concerns. Still, every type of control by the interested public, citizens and civil society is very limited in this area. Even acts that regulate confidential procurement procedures are, as a rule, not available.”

In addition to having no insight into what is procured confidentially, public does not know which procedures are being used and whether they are implemented with respect to the general principles of competitiveness, equal treatment of all participants and non-discrimination prescribed by the EU directives regulating this area.

However, with the Amendments to the Law on Public Procurement from June last year, regulation of security and defence procurement is reduced to two articles. One prescribes that the types of procedures and the manner of their implementation for the procurement of equipment, goods, services and works that are directly related to military and security-sensitive equipment, as well as services and works, shall be regulated by the Government’s regulation for all contracting authorities performing these procurement. These are the Ministry of Defence, the Ministry of Interior and the National Security Agency. The Government regulation has not yet been adopted, although the deadline of six months since the law came into force expired at the end of 2017.

The second article of this Law prescribes a very wide scope of exemptions from the application of the said Government regulation. This implies, inter alia, that bylaws will not be implemented if the estimated value of procurement is equal to or less than 20 thousand euro for goods and services or 40 thousand euro for works. The Law now prescribes that the exemptions will be regulated discretionarily – by the internal acts of the contracting authorities.

According to the Law on the National Security Agency, procedure for implementing these procurement is regulated discretionally by the act of the Director of the Agency. The Rulebook on the procedure for conducting confidential procurement in the NSA is classified as “INTERNAL”. This act was adopted on December 8, 2015, and its secrecy, according to the law, is valid for two years. At the end of December last year, the NSA refused access to this document to the Institute Alternative, although the classification time had expired.

Rare records on what is purchased through confidential procurement are provided in reports of the State Audit Institution (SAI) – drafted in 2011 and 2015 for NSA, and in 2008 and 2014 for the MoI. With the approval of the Government, the NSA purchased 11 cars in 2015, based on a two-year leasing agreement with a total value of €349.334. In addition, it bought computer equipment for €57.308 – desktop and laptop computers and printers. As the technical characteristics of cars are in accordance with the standards of high middle class passenger vehicles, the SAI determined that this, as well as purchased computer equipment, cannot have the treatment of special equipment. Therefore, it was not supposed to be purchased via confidential procurement, but in accordance with the Law on Public Procurement, as assessed by the SAI Audit report of the NSA for 2015.

SAI Senator, PhD Branislav Radulović, who has been auditing the MoI, the NSA and the Ministry of Defense for the last 10 years, explains for the CIJ-MNE that “confidential procurement should be conducted in accordance with the special internal act of the contracting authority, which they are obliged to adopt in accordance with Article 116 b of the Law on Public Procurement”.

The NSA and the MoI authorities have not answered CIJ-MNE question as to whether auditor’s recommendations were fulfilled, and on the basis of which acts are confidential procurement being conducted now. The answer was only received from the Parliament’s Committee on Security and Defence. The letter signed by Obrad Mišo Stanišić, the chairman of the Committee, provides links from the sessions where SAI reports and final budgets of the Ministry of Defence, the MoI and the NSA were discussed. “The Committee was informed on the implementation of the NSA’s obligations based on the SAI recommendations in the Final Report, which the Committee deems as responsible and professional attitude towards them”, formulations such as this one from the report of December 2016 are common.

“In accordance with the Law on the Parliamentary Oversight of Security and Defence Sector, the Security and Defence Committee, since 2011 when the law came into force, regularly reviews all SAI reports on financial and other operations of bodies and institutions in the area of security and defence. So far, in all cases, the Committee supported all SAI recommendations with its conclusions and additionally obliged audit subjects to implement them,” stated Radulović.

The SAI announced that it will control this year how the MoI reacted to their recommendations.

The Army Buys and Denies It

In its replies to the CIJ-MNE, the Ministry of Defence claims that it does not conduct confidential procurement procedures as of May 2015, stating that the Decree on External Trade of Special Purpose Means, which prescribed these affairs, ceased to be valid at the time.

On the other hand, according to the findings of the SAI, in 2016, the Ministry of Defence carried out four procurement procedures, two of which related to security-sensitive equipment. The auditor points out that he could not review the procedure.

“The state auditor could not determine whether and in what way procurement to which the Law on Public Procurement does not apply (confidential procurement) are planned, and how are procedure and reporting on the procurement conducted, because there are no acts specifying this,” reads the auditor’s report released in June 2017.

In November 2015, following SAI recommendations, a meeting was held at the Ministry of the Internal Affairs, attended by representatives of the MoI, the Ministry of Defense and the Public Procurement Administration. It was concluded that the new Law on Public Procurement shall define concept, object and procedure of confidential procurement, and that until then a decree shall be adopted that would serve as basis for the implementation of the procurement procedure, and a working team shall be formed with the task of drafting the decree.

Obviously, the recommendation on adopting decree was not implemented. The Ministry of Defence stated for the CIJ-MNE that since May 2015 they do not implement their own “Plan on measures and activities for monitoring and implementing elimination of shortcomings established by the SAI audit”, in the part related to confidential procurement.

“At the beginning of December last year, we requested from this Ministry information on confidential procurement spending for the past five years and we still have not received it. Regarding the act regulating this area, for whose adoption deadline expired in December last year, they replied it is “in drafting procedure”. The whole system of confidential procurement is so closed that even basic data cannot be obtained. Such non-transparency allows for great abuses, and frequent amendments of laws and bylaws regulating this area greatly contribute to this. The Ministry of Defence has the responsibility to prepare a by-law and propose it to the Government for adoption not only for itself, but for other bodies that conduct confidential procurement, which makes this kind of acting and non-transparency even more worrisome,” says Ana Đurnić. 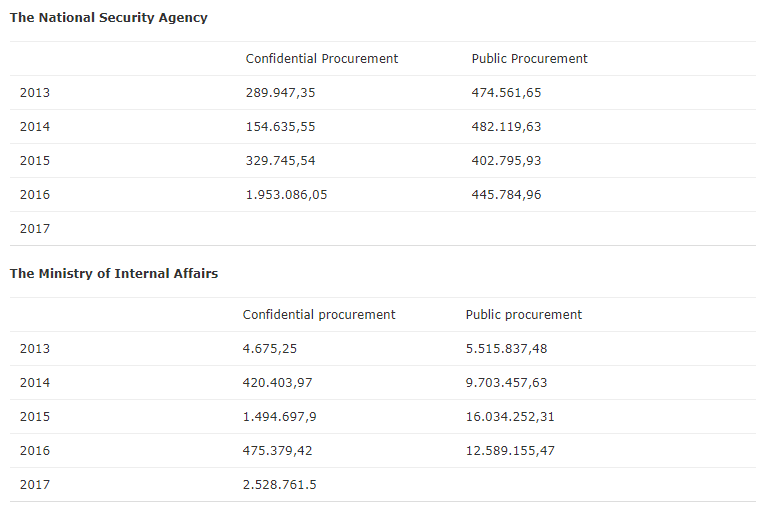 This article was produced within the project “Confidential Procurement – Out of Sight, Out of Mind”, implemented by Institute Alternative and Centre for Investigative Journalism and financed by the European Union within the project “Accountability, Technology and Institutional Openness Network in the South East Europe region – ACTION SEE”. The contents of the article are the sole responsibility of the authors and can in no way be taken to reflect the views of the donor.