Our Milena Milošević participated at the conference held in Belgrade with the topic of the role of independent think tanks in the process of policy making, in the time of democratic “regression” of the governments in the region and manipulation of information. 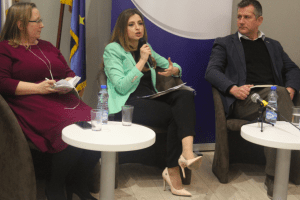 Milena said that the most responsible actors – governments, to which we address the greatest number of recommendations, still do not understand work, role and importance of think tank organizations.

In the process of creating recommendations for better public policies that we address to governments we are faced with their twofold agenda:

As evidence of these claims, Milena has provided some information on the situation in Montenegro:

This is most important because it speaks about links between non-governmental organizations and the European Union, other donors and international actors, as well as links with other parts of civil society, especially the media. Civil society and international community often adopt our suggestions and take over and advocate our recommendations, which is also one of the ways to influence governments.

“Unfortunately, this means that we still need to seek support for our recommendations outside the state in order to be more influential. We all know that it would be more desirable to ensure sustainability of local think tanks, to reduce dependence on donors and increase local ownership over our initiatives, which we try to provide through joint cooperation with media and non-governmental organizations,” said Milena. Despite this undesirable situation, it is positive that we can map “reform champions” which most often come from independent supervisory institutions.

The conference was organized as a final event within the project “Raising capacities and advocacy potential towards more substantive involvement of civil society organisations of Visegrad group and Western Balkan countries”, supported by the International Visegrad Fund.